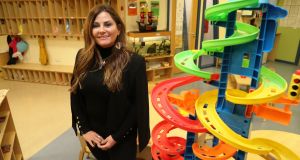 Karen Clince CEO of Tigers Childcare at the company’s facility in Leopardstown. They have 12 such centres in the greater Dublin area, and one in the UK. Photograph Nick Bradshaw

Karen Clince has built an international childcare group over the last 18 years but it all started with an after school club.

At the time, Clince was a special needs teacher at a school in Glasnevin. Watching children heading off at the end of the day to a variety of formal and informal care structures, she noticed that nobody seemed particularly happy.

“So I approached the principal about setting up an after school club,” she says. “I wasn’t making big money at the time and I never expected the company to grow to where it is today but I knew it was something I loved,” she recalls.

That small start has evolved into a group that is now among the largest childcare providers in the State, turning over around €6 million a year before Covid-19 hobbled the economy.

In many ways, it was an accident of circumstance. Though she had always loved working with children, leaving school she was, she says, well aware that teaching and childcare were not careers where money came easily. So she opted, instead, for a degree in marketing.

A job she hated with a software company followed only to find herself made redundant in the first dot.com bust. At the time, she was also pregnant with her first child. Determined now to pursue a career in an area she liked and conscious also that, as a single mum, she would need some flexibility, she retrained as a special needs teacher.

She’s never regretted it since.

Tigers Childcare now operates 12 centres in the greater Dublin area, and one in the UK. Between them, they accommodate around 2,000 children and employ 183 staff, making them one of the largest childcare groups in the State.

It operates in larger spaces – ideally around 6,000 to 7,000 square feet – largely catering to markets with two working parents. Clince says they generally operate at above 95 per cent capacity in its pre-school services. The figure for its after school operations are closer to 75 per cent and around 80 per cent for the early years full day operations.

The professionalism of Ireland’s childcare sector has, she says, increased rapidly, especially over the past seven to nine years. That timeline corresponds closely to the fallout from the RTÉ Prime Time exposé of the sector in 2013 and Clince acknowledges that it was a catalyst for the sector.

“We have something that we should really be proud of in regards to how we treat children when they come now to early years education,” she says.

Tigers was a much smaller operation at the time and not one of those caught up in the scandal. Clince argues that the companies that found themselves in trouble were investor-led, rather than led by people who were qualified in the sector.

But everyone in the childcare sector had to deal with the fallout.

“Even though we weren’t the ones under scrutiny, we still had a large number of parents and they all had questions they wanted answered,” she says. “But it definitely gave us the opportunity to show what we did better.”

Prominent among those, in terms of parental piece of mind, is the open access parents have to their children’s childcare setting. All parents have keycode or swipe card access to the centres and are free to drop in unannounced at any time, Cline says – at least outside Covid restrictions.

But some old issues remain – including pay and staff retention, and Government support. A common refrain about childcare is that it is too expensive for parents and yet wages are too low for staff. Clince says the issues are real and the concerns valid, not lest as staff in the sector are now far more professionally qualified than they were a generation ago.

“These are people doing degrees and masters and then they come into us and we’re offering them a starting wage of €12.75. I mean you wouldn’t get out of bed for it unless you loved children,” she says.

The answer, she argues, is greater Government support. The Irish Government’s support for childcare amounts to about 0.4 per cent of GDP, she says, compared to an OECD average of twice that. That support comes through funding for the Affordable Childcare Scheme and the Early Childhood Care and Education programme, which offers two years pre-school care during school term times to children from the age of three.

That support has risen since the Covid pandemic struck, mostly through the employee wage subsidy scheme, bringing it closer to the OECD average and Clince says the sector is looking for this support to continue when the economy returns to normal on the understanding that it would be used to increase the pay of staff.

The childcare sector remains notorious for staff turnover. Industry-wide, the figure is about 40 per cent every year, with Tigers operating at around 30 per cent, according to the company.

“Staff retention is [a] huge [issue] and I think Covid only made it worse,” Clince says. We have had a huge exodus, or a huge number of people who didn’t want to return to work.”

With an economic recovery hopefully looming, the demand for childcare will grow and that means having staff in place.

“I think the only way we are going to address it is looking at a pay scale,” she says. People have to make ends meet so they might move for as little as 70 cent an hour. She recalls staff who were made homeless two years ago.

“You’re embarrassed to be making a success of your business and growing when you have colleagues in those situations. So there has to be a fairing up of it.

“I don’t think it is anything the providers should be scared of because if you are a good provider, you’ll always have bums on seats, you’ll make a profit. But we should all be pulling together to make sure our colleagues are paid better.”

Even in Covid, Clince is confident for the future. but it hasn’t always been that way. Back in 2009, as the financial crash drove Ireland into recession, Tigers had just opened two new centres.

“We’d over-reached. We didn’t have enough money to pay the wage bill that Christmas. Thankfully with the support of AIB and family and friends, we got through that but it was a lesson to me to be very careful with the finances going forward.”

And she hasn’t had far to go should she need reminding. Her big sister Susan is managing director of the business and her mum, Mary, who retires this month, has until recently been managing the accounts for the business.

2017 marked a big year for the business with the takeover of three childcare centres from multinational provider, Bright Horizons. At the time, those centres were operating at just 20-50 per cent capacity. Over 18 months, Tigers got that up past 95 per cent in a move that, she says, gave them valuable experience at turning around existing businesses.

A year ago, Clince made the unusual decision to take her brand international. With no experience of working outside Ireland, she bid for and won a contract to run a new childcare facility in London’s Elephant & Castle.

“To be honest, when we put in the tender we didn’t think we were going to be winning it. We were going up against the big players in the UK and really it was just an opportunity to pitch,” she recalls.

The unexpected victory presented a further issue – finding funds to turn the empty space into a state-of-the-art childcare setting as part of a wider urban regeneration project. DunPort, an Irish non-bank lender, specialising in debt finance for SMEs looking to scale up their business, stepped in with €5 million.

Covid-19 has hit everyone in the sector hard.

“We were very hard hit and we were lucky to have that financial backing from DunPort prior to going into Covid,” Clince says. “So we had money in the bank. That saw us through.

“We were haemorrhaging money during the closure months but we worked hard to get back on our feet and, with Government support, we’ve now been able to get to a place of sustainability.”

London reopened in June, Ireland a month later. Now, six months later, the Irish centres are back in lockdown – open only to vulnerable children and those of essential workers.

She thinks the closures and ongoing restrictions have been hard on parents and staff, but particularly on children, many of whom have missed a critical year of development. Staff at the centres are noticing a regression in children, especially babies, many of whom have never had a chance to socialise outside the home.

“Children’s voices probably need to be a bit louder in the debate on the impact of the pandemic,” she says. “As adults, we can cope with missing a year but, for them , a year is huge.”

For Tigers, Clince does not expect Covid-19 to halt its growth plans, saying she’d be disappointed if they weren’t’t opening something in 2021. In Ireland, because of the size of the childcare centre they operate, locations will of necessity be around cities, most likely the greater Dublin area with which it is familiar.

London, Clince, says, will be slower, although it is weighing up one acquisition that could close this year.

“It was important to us first to prove the UK, to get it up and running to make sure we could get the numbers right. We’re now there so we are ready for the next phase.”

Turning 40 only later this month, she is still brimful of energy and ideas.

“I do think the markets is ripe for acquisitions and mergers,” Clince says, noting that pipeline projects feature in every monthly bord meeting.

But for all the numbers that running a business inevitably involves, she makes a point of staying in touch with the coalface – visiting two of the childcare centres a week until Covid intervened.

And every parent using a Tigers service has her personal phone number. “They know that, if a problem arises, it’ll be dealt with. This is a relationship business and that’s kind of what it’s built on.”