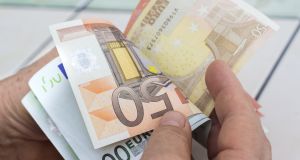 ‘The way I see it, my wages have been cut by double the amount to which I agreed.’ Photograph: iStock

I am one of the 600,000 people who got a huge tax bill because I was enrolled by my employer to the TWSS (Temporary Wage Subsidy Scheme) last year.

Most employers topped up their employees’ net wages during this period, not their gross, so, in effect, we were given a backhanded pay cut.

People were not paid their contractual gross wages last year and did not agree to this as they were not given a choice to be enrolled in the scheme. For example, a single person earning €60,000 normally who was put on the wage subsidy from April to August will see a difference of €7,500 in gross wages paid last year.

How were employers allowed to do this – ie, reduce employees’ gross wages without consulting them? In my case I had a 10 per cent wage cut that was agreed but I was also put on the wage subsidy and now have a tax bill of €3,000. The way I see it, my wages have been cut by double the amount to which I agreed.

I don’t think most people affected by the TWSS and who were topped up by their employer understand this and don’t realise they did not get their full wages last year.

You’re one of a number of people who got in touch after those Revenue preliminary statements of liability landed in their inboxes just over a week ago so it is clearly a big concern for people.

And many people seem to think that employers were capitalising on the Covid crisis to cut pay but that is not the case. They were, in fact, prohibited by Revenue, under the terms of the TWSS, from paying you sufficient so that you would ultimately have the same net pay at year-end.

The TWSS paid up to €410 a week depending on a person’s salary before the pandemic lockdowns. This was paid gross, so no tax, USC or PRSI was deducted at source. The Revenue said PRSI would not apply but, depending on the year-end position of the individual, tax and USC would apply at year-end.

Of course, no one really paid any attention to that, given their more immediate worries at the time.

The Revenue Commissioners allowed employers to top up this subsidy where they had the financial wherewithal to do so but this is where things got messy. It only permitted the employer to top wages up to the average net weekly wage. Employers were expressly not allowed to compensate for the fact that there would be tax due on the TWSS subsidy by topping up to your normal gross weekly wage.

Revenue warned that, where employers did try to do so, Revenue would either cut back on the subsidy amount or not pay it at all.

I’m not saying people would not have accepted a pay cut as an alternative to losing their jobs. I’ve no doubt many people would

It was a mad scenario from the start, and one we have written about several times.

Revenue’s defence has always been that the priority was to keep it simple and get it rolled out immediately so there was no time to arrange for the subsidy to be taxed at source or for wages to be harmonised around previous levels. I’m not saying it was the right decision, only that is what was decided.

As you say, in practical terms, it meant that people faced a “sleight of hand” pay cut, on top of any that might already have been agreed with their employers as tens of thousands of people like you did.

I’m not saying people would not have accepted a pay cut as an alternative to losing their jobs. I’ve no doubt many people would. But it remains the case that this was presented as making pay whole because you got the same net pay at the time: however, the end-year tax bill was always looming and inevitably meant a de facto pay cut.

So, a large number of people now have tax bills, some of them, like yours, substantial...and they have suffered an effective pay cut demanded of employers by the Government via Revenue.

Not much cheer, but I hope a little clarity.

5 Irish biotech Amarin gears up for drug launch in Europe