Cost to develop Dublin city apartment as much as €619,000

‘Bricks and mortar’ account for less than half of overall build costs, report claims 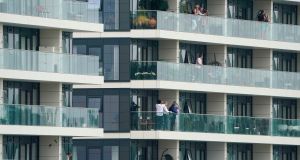 While the cost of building certain apartments had come down in recent years, reflecting changes to the design guidelines, the report said affordability remains ‘a huge challenge’. Photograph: Alan Crowhurst/PA Wire

The cost of delivering a two-bed apartment in Dublin ranges from €359,000 for a low-rise unit in the suburbs to as much as €619,000 for a high-rise unit in the city centre, according to a report from the Society of Chartered Surveyors Ireland (SCSI).

The figures, based on data obtained from 49 developments in Dublin last year, suggest the “bricks and mortar” element of construction on average accounted for less than half (47 per cent) of the overall cost of building an apartment.

The SCSI’s Real Costs of New Apartment Delivery 2020 report feeds into an increasingly heated debate about the cost of construction in Ireland.

Apartments tend to be more expensive to build than houses because of increased structural requirements, such as lifts, car-parking spaces and fire safety regulations.

While the cost of building certain apartments had come down in recent years, reflecting changes to the design guidelines, the report said affordability remains “a huge challenge”.

Based on the Central Bank mortgage lending rules, which restrict people to borrowing 3½ times their salary, a first-time buyer couple would require a deposit of €38,000 and an income of €96,000 to buy the cheapest apartment unit in the suburbs.

A first-time buyer couple with a deposit of €60,000 and an income of €150,000 would still not be able to afford a typical two-bed apartment in a high-rise development in the city centre, the report noted.

The report suggested that the build-to-rent model was more viable than the build-to-sell model in many locations because of high construction costs.

Nonetheless, it noted that construction costs had come down for certain apartment types because of a change to the Department of Housing’s design guidelines in 2018, which reduced the car-parking requirements.

Paul Mitchell, chair of the SCSI working group that authored the report, said the reduction in costs and improved viability were positive signs but he said the build-to-sell model still faced serious challenges.

He said the report included a new category for nine to 15 storeys, which showed schemes are increasing in height.

“However, it is important to reiterate, that contrary to popular belief, building costs increase rather than decrease when building higher and become much more pronounced after 15 storeys/50m. As such, high rise is not typically used for affordable solutions,” he said.

The main drivers of apartment construction in Ireland are currently private rented sector investors, mostly from abroad.These investors have flocked to Ireland to avail of comparatively strong returns from the rental sector and are buying apartment developments off the plans as single lots.

Meath site zoned for residential and retail guiding at €2.5m