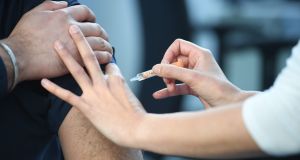 AstraZeneca has told the EU to expect only 40% of agreed supplies in the first quarter. Photograph: Oli Scarff/AFP

AstraZeneca has made a right mess of its Covid vaccine programme to date.

After early disquiet around communications over a halt to trials following an adverse reaction, it then made a hash of reporting results. They were stellar but confusing. It later transpired that the best figures critically did not relate to older patients and in fact evolved from an initial dosing error during the trials process.

Now, on the cusp of what it hopes will be approval for its vaccine from the European Medicines Agency this week, it has suddenly told the EU to expect only 40 per cent of agreed supplies in the first quarter.

The EU, understandably, is not impressed. Having paid a three-digit million euro sum upfront to pre-book production capacity and fund advance manufacture of doses, it wants its vaccine.

And finger-wagging by Pascal Soriot, the AstraZeneca boss, as he publicly admonished “me-first” governments at a World Economic Forum event amid the wreckage of his own company’s contract commitments has not helped.

Cheap and easy to handle, AstraZeneca was to be the game-changer in the ongoing battle to get the pandemic under control and return crippled economies to something approaching normality.

The supply issues suddenly mean that it is less likely. That role increasingly looks set to fall to the Johnson & Johnson/Janssen jab.

It too will not be troubled by the need for ultra-cold storage temperatures. Even better, it will likely be the first vaccine approved for use in Europe that involves just a single injection, greatly simplifying the logistics of a national vaccine rollout.

According to data from the Financial Times and Duke University, the EU is among the biggest purchasers of the J&J/Janssen jab, well ahead of orders form the US, the UK and elsewhere.

Trial data is expected within days and the vaccine is likely to secure US approval next month. The task for the EMA will be to see how far it can go to streamline its consideration of the vaccine without compromising safety and the necessary rigour of the approval process.