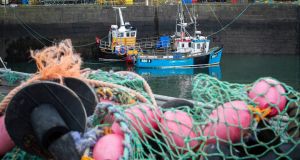 Fears have been expressed that the British government will “cook the books” so that Northern Ireland fishermen will not get a fair share of the extra allocation of fish quota secured through Brexit.

Fish producer representatives already have written to British prime minister Boris Johnson insisting that they get a proper allocation of the extra fish quota won for the UK as a result of Brexit.

On Tuesday they took their case to the Assembly’s agriculture committee where representatives Alan McCulla and Harry Wicks warned that Northern Ireland fishers could be disadvantaged so that the British government could provide extra quota to their British counterparts.

Mr McCulla of the Anglo North Irish Fish Producers Organisation said he understood that the North’s agriculture minister Edwin Poots had raised the issue on Monday with British fisheries minister Victoria Prentis but that she could not give any guarantees about Northern Ireland’s fish allocation.

“All that does is just continue to raise suspicions that somebody in London is trying to cook the books and steal quota off Northern Ireland fishermen,” he said.

“That’s the level we have got to, having replaced one EU system of discrimination to Northern Ireland fishermen, that we’re now going to replace it with a GB system that applies more discrimination,” he said.

In the coming weeks the British government is due to decide how the extra quota will be allocated.

Mr McCulla and Mr Wicks of the Northern Ireland Fish Producers Organisation told the committee that currently Northern boats were entitled to 8.4 per cent of the UK fish quota and they wanted this percentage applied when the extra allocation is shared out between the North, England, Scotland and Wales.

They feared however the British government would restrict most of the extra Northern allocation to the Irish Sea when 80 per cent of Northern Ireland’s fishing opportunities were outside the Irish Sea.

“It is ironic today that Northern Ireland’s fishing industry’s greatest fear from the Brexit deal is not customs or associated barriers but rather that within the UK, London will seek to redistribute some of what should be Northern Ireland’s share of the additional fishing quotas gained from the EU,” said Mr McCulla

He told the committee that he was disappointed with the Brexit fisheries deal because expectations were raised “so high” by the British prime minister Boris Johnson and his Ministers. However, if Northern Ireland got a fair allocation of the quota then by 2026, based on today’s figures, that would be worth an extra £19.1 million per year to the industry.

That was a small amount of money in terms of UK fishing but was “big to coastal communities in Northern Ireland”.

“We believe that Defra (Department of Environment, Food and Rural Affairs) are manoeuvring to reallocate quotas in Northern Ireland to England, Scotland and to lesser extent Wales to placate fishing interests there who are bitterly disappointed with the outcome of the fisheries element in the UK-EU trade and cooperation agreement,” Mr McCulla said

Reinforcing that point Mr Wicks added, “At the end of this process, the English fishing vessel could receive a greater uplift of fishing opportunity than a Northern Irish fisherman purely by the virtue of the fact that he is English. That is grossly unfair, and in my view politically untenable.”

The committee agreed to write a letter of support for the Northern Ireland fishermen to the British government.