Some TV makes us cry. The question is, do we want to?

‘People are still up for challenging telly,’ says Sky. But ‘chocolate ice-cream’ appeals too 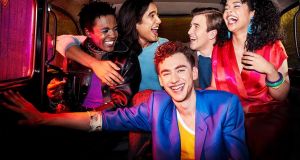 Watching all five episodes of It’s a Sin at the weekend – breaking between each one for recovery – was an exercise in face-mopping, with occasional rewinds to catch the bits missed in the blur. Social media was awash with similar reactions: the Russell T Davies Channel 4 series about young gay friends caught up in the Aids pandemic makes viewers cry. A lot.

It was reasonable to expect this would be the case before the show premiered, and that the joyfulness that is the hallmark of this incredible writer’s creations wouldn’t offset the sadness and brutality, only make it more acute. Still, there’s a difference between reasonable expectations and the certain knowledge that all your friends wept throughout. It would be understandable if people who hadn’t kept pace with the early binging responded to this high-level emotional spoiler by baulking at the wobbly experience that lies in wait.

So how do television commissioners account for the likelihood that the current pandemic has rendered audiences fragile at the opening credits, never mind the end ones?

The question is a moot one in the case of It’s a Sin, which wrapped filming before the Covid-19 crisis and has managed to gain unanticipated timeliness in its depiction of misinformation, disbelief and denial. As much as some viewers will be reluctant to watch “heartbreaking”, “gut-punching” drama at a time when their hearts are already broken and their guts already punched, the indications are that It’s a Sin has claimed its rightful destiny as a word-of-mouth hit – an important, brilliant watch that will only win further acclaim when it reaches a US audience via streaming service HBO Max.

On the other hand, it seems fortunate that two purposefully intense shows from spring 2019 – the BBC/HBO dystopian family drama Years and Years, also by Davies, and Sky/HBO’s Chernobyl – landed well before Covid-19. If their broadcast had been one year later, these tales of disaster revolving around examples of extreme human stupidity (imagined in one case, real-life in another) might not have seemed so astonishing or appealing – not when the news was so full of fears and face-palms. Indeed, even on the news, editors have been going out of their way to include hopeful, uplifting moments amid the sustained headline gloom.

Ahead of the launch of Sky’s new line-up of shows, I asked Zai Bennett, managing director of content for Sky UK and Ireland, if Covid-19 had triggered conversations about the tone of the television it makes. Is there demand now for content that is harrowing and tense?

“Totally. People don’t just eat chocolate ice-cream is what I always say. They like to have a raft of different tones and flavours in their diet of telly,” said Bennett, citing the “amazing numbers” garnered by Sky series Save Me Too during the first lockdown despite its bleak subject matter (child abduction, abuse, grief). “People are still up for challenging telly.”

Hollywood may have already spewed out its first coronavirus-inspired thriller – Michael Bay’s hasty and much-panned Songbird is about a future variant called “Covid-23” – but most broadcasters and streamers will be wary of overinvesting in this on-the-nose vein. Screen production lead times aren’t always longer than vaccine production lead times, but they’re still long enough to quash the urge to be topical.

“I’m not rushing to commission any Contagion pieces. I don’t think I want to flood the schedules with shows with people wearing masks and so on,” Bennett said. Sky Atlantic will, however, address the pandemic in This Sceptred Isle, a five-parter covering the UK government’s handling of the first wave, with Kenneth Branagh as Boris Johnson.

It seems deeply unlikely that This Sceptred Isle, directed and co-written by Michael Winterbottom, will be a glorious propaganda piece, though this hasn’t prevented a mini-backlash online from people convinced it will be, some of them out of the mistaken belief that Rupert Murdoch owns Sky. The actual risk with this series, which won’t be shown until autumn 2022, is that it will arrive both too late and too early, at a point when viewers have moved on – perhaps beyond all home-based entertainment, if we cross our fingers hard enough – and aren’t ready to relive recent history.

Of course, Bennett is right: there is nothing one-note about either the schedules now, or commissioners’ in-trays, and nor should there be. Even within a drama itself, few are as monotonal as, say, Hulu’s The Handmaid’s Tale, which is threatening to return later this year for more oppressive grimness. Perspectives vary, too, from sofa to sofa, and from Monday to Sunday.

HBO’s The Undoing aside, I haven’t been in the mood for gritty dramas about murders and sexual assaults of late, but for other people these can do wonders for good old tension release within the safe confines of fiction. Conversely, I can’t wait for Sky’s forthcoming adaptation of John Wyndham’s creepy science fiction classic The Midwich Cuckoos – it’s “escapist”, Bennett promises – but parents traumatised by months of home-schooling may have mixed feelings about a plot hinging on a small army of mysteriously conceived, supernaturally powerful children.

Whichever directions the money sprays in next, it feels notable that many of Netflix’s 2020 hits – Bridgerton, Emily in Paris, season four of The Crown – have been fluffy and untaxing, while even surprise smash The Queen’s Gambit, despite its children’s home and addiction elements, presented a stylised world of triumph and achievement. These “chocolate ice-cream” TV shows offer more in the way of light fun than rewarding catharsis, but, hey, this is the third wave now. Any distraction will do.