Move is to encourage people to stay at home and applies to orders over €40, company says 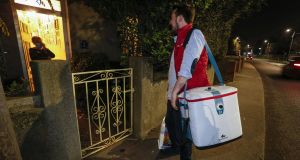 The company which has been running the grocery delivery service offered by Dunnes Stores since late last year has announced it is to waive its delivery fee for a month from Thursday to encourage people to stay at home.

Buyme.ie said its €4.99 delivery charge will not be imposed on orders over €40 until February 21st and the company’s founder and chief executive Devan Hughes said it was taking the step because “reducing all our movements is vital now more than ever.”

He said its same-day grocery delivery service had been important for people “at high risk or time poor especially with the return of homeschooling”.

He added that the company’s move had the support of Dunnes Stores, which he said was aimed at supporting its customers “in staying safe, while doing the week’s shop and still have access to the variety of goods they have come to expect”.

He expressed the view that it was “down to local Irish businesses to do what we can, when we can to support our local communities during this stressful time.”

He said that when it was announced that the country was returning to lockdown the same day slots had filled up faster than anticipated.

“We are now trading 600 per cent ahead of the same period last year. However, we have also been able in January to nearly double our personal shopper network to meet this demand and ensure the satisfaction of regular and new customers, while also allowing users to book a dedicated 1 hour slot to plan their week ahead safely.”