With demand at unprecedented levels, prices could rise for those flying to North America 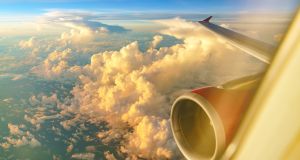 Norwegian Air said on Tuesday that it was ceasing its transatlantic services from Ireland. Photograph: iStock

With the announcement on Tuesday that Norwegian Air was ending its transatlantic routes from Ireland in September, the era of budget airlines flying to North America from this island has effectively ended.

Two years after it launched its routes to Boston, New York and Toronto, Norwegian signalled that these would be no more, in part down to a perfect storm caused by the worldwide grounding of the Boeing 737 Max family of aircraft.

For Norwegian, this meant leaving two planes idly parked at Dublin Airport, forcing the carrier to lease planes at short notice to cater for travellers in the peak summer season. At the best of times, leasing aircraft is an expensive endeavour, and there is still no clear timeline for the return to service of the Max jets. With Norwegian already facing separate troubles, it was becoming hard to see how its Irish business model would hold up.

The cancellation of all of the airline’s Irish routes clearly wasn’t the plan until very recently, given that the Oslo-headquartered carrier added a route from Dublin as recently as March. Indeed, prior to the Max problems, Norwegian referred to itself as one of Dublin Airport’s “leading transatlantic carriers”.

For Irish travellers, the loss of competition is undoubtedly a bad thing but with significant expansion of transatlantic service over the past number of years, several options remain for travel to the US and Canada.

From Dublin Airport alone, there are 189 flights a week to the US in the summer of which just 17 were operated by Norwegian. Delta Airlines, United Airlines, American Airlines and Aer Lingus all runf flights, some twice a day, to locations including Boston, Chicago, Dallas Fort Worth, Hartford in Connecticut, Miami, Los Angeles, Minneapolis, New York JFK, Orlando, Philadelphia, San Francisco, Settle and Washington.

Then there’s Canada, which has 39 flights week, four of which were operated by Norwegian. Among the other operators to the country are WestJet, Air Canada and Air Transat which fly to Calgary, Halifax Nova Scotia, Montreal, Toronto and Vancouver. The Canada route expansion has happened quickly, too. About seven years ago there was nothing more than a summer service to Toronto.

Despite the substantial increase in routes and passenger numbers, there is concern that the lack of a low-cost operator such as Norwegian could lead to a gradual increase in prices.

“With Norwegian gone, fares will climb up, there’s no doubt about that because there’ll be a demand there. There’s not good news for the consumer,” said Pat Dawson, chief executive of the Irish Travel Agents Association. While he expects prices to rise gradually, he suggests that the close proximity of London Heathrow and London Gatwick (the first- and fifth-best connected airports to North America) to Dublin – the sixth-best connected airport to North America – will keep a lid on price growth to some degree.

But while Dublin will continue to have good connections, those Irish outbound passengers who travelled through Cork Airport will not be so lucky. Before long, the airport will revert to having no North American connections, a fact that’s unlikely to change until 2021 at the earliest, according to Mr Dawson, given the length of time it takes to negotiate a transatlantic route.

And this is as transatlantic flights have never been more popular. In Dublin Airport last year some 3.8 million transatlantic passengers passed through the airport while in July this year three were 484,000. To put that in context, in 2008, before the economy crashed, the airport carried 1.7 million such travellers.

So with that significant demand, concerns over pricing are not unwarranted. However, Aer Lingus, at a capital markets day in November, spelled out its mission to be the “leading value carrier” across the North Atlantic. While prices on Norwegian’s scale seem unlikely, the fact that IAG is positioning the airline as a low-cost carrier on transatlantic routes, in all but marketing, will be positive for consumers’ pockets.

But make no mistake, headwinds outside the control of airports and airlines are lingering. Global trade wars and unpredictable oil prices could wreak far more havoc than the loss of one carrier.