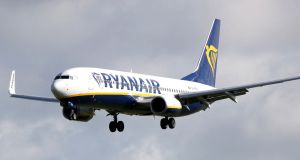 Ialpa has said that it remains committed to talks with Ryanair. Photograph: PA Wire

Ryanair faces the possibility of further strikes this month as some of its Irish-based pilots complete a ballot on industrial action on Friday.

Members of the Irish Airline Pilots’ Association (Ialpa) – a branch of trade union Fórsa – directly employed by Ryanair have been voting on industrial action, up to and including strike, in a dispute over pay.

The result of the ballot is due on Friday, raising the possibility that Irish pilots at the airline could strike later this month, along with UK pilots and Portuguese cabin crew, who are pursuing their own separate claims against the company.

If Ialpa members at Ryanair back industrial action, it would be at least a week before they could strike or take other steps, as the union is obliged to serve seven days’ notice on the company.

The union submitted a pay claim to Ryanair earlier this year, but said recently that it was frustrated with the lack of progress on the issue with the airline.

The organisation added that the decision to ballot reflected members’ disappointment with their employers’ response.

Ialpa has said it remains committed to talks. The union has not detailed the increase it is seeking from the airline. Pilots’ pay varies according to rank and other factors.

During industrial unrest last year, Ryanair said it paid captains between €140,000 and €200,000 annually, but unions disputed those figures.

Members of the British Airline Pilots’ Association intend to strike on August 22nd and September 2nd as they pursue a separate pay claim.

Earlier this week, the UK union said that eight out of 10 members in Ryanair voted in favour of industrial action at Ryanair. The turnout was 72 per cent.

Cabin crew in Portugal plan a five-day stoppage beginning on August 21st in a dispute over leave entitlements.

Ryanair recently told staff that it could have to cut up to 900 pilot and cabin crew posts this winter on the back of stalled aircraft deliveries, Brexit fears and rising costs.

The airline suffered a series of strikes last summer in the Republic and elsewhere, which it said cost it €120 million. Ryanair maintained that it operated 90 per cent of its schedule through the industrial unrest.