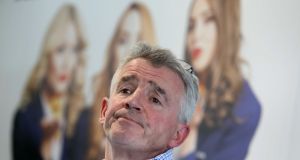 Ryanair, one of the most directly exposed Dublin-listed companies to Brexit, has laid out the impact of sterling volatility on its earnings, saying every 1p decline against the euro is wiping €7 million off its earnings.

“For the remainder of fiscal year 2020, taking account of timing differences between the receipt of sterling-denominated revenues and the payment of sterling denominated costs, Ryanair estimates that every 1 pence sterling move in the EUR/GBP exchange rate will impact income by approximately €7 million,” the carrier warned in new bond documents.

The comments in the prospectus for its bond programme came as sterling dropped 0.7 per cent on Friday to a two-year low of 92.9p against the euro on news that the UK economy had contracted unexpectedly in the second quarter, adding to mounting market nervousness about the prospect of a no-deal Brexit at the end of October.

Sterling’s decline against the single currency has totalled 8p over the past three months alone, with the sell-off having been accelerated since Brexiteer Boris Johnson became British prime minister late last month.

“Brexit has caused, and may continue to cause, both significant volatility in global stock markets and currency exchange rate fluctuations, as well as create significant uncertainty among UK businesses and investors,” Ryanair said, noting that 22 per cent of its revenue in the year to March came from its UK operations.

Still, the impact of sterling volatility was partly offset by the fact that the UK also accounted for 18 per cent of its non-fuel costs. Analysts expect the company to report net profits of €820 million for the current year, according to Bloomberg data.

Ryanair chief executive Michael O’Leary blamed Brexit, delays in plane deliveries, falling air fares, rising staff and fuel costs last week as he said that as many as 900 jobs are at risk at the company.

One of the big factors is a delay in the delivery of Boeing’s new 737 Max aircraft, which is hitting the carrier’s expansion plans. Regulators grounded the craft in March on safety fears prompted by two crashes blamed on software failures. Boeing expects to have it airworthy again in the autumn.

The Ryanair bond prospectus said that “should any negative public perception develop in relation to the safety of the Boeing 737-MAX series, Ryanair’s growth plans and profitability could be materially adversely affected”.

Meanwhile, the airline group said last Monday that its average air fares fell by 6 per cent to €36 in the three months to the end of June, contributing to a 21 per cent drop in its profits to €243 million for the period.

Shares in the company have fallen by 16 per cent so far this year, to €9.05. The company has €2.45 billion of bond debt outstanding.