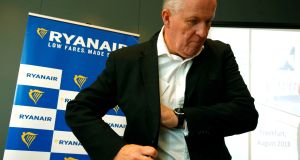 Ryanair is taking legal action against outgoing chief operations officer Peter Bellew, who is continuing to work out his notice at the Irish airline.

It emerged last month that rival carrier Easyjet had poached Mr Bellew from Ryanair and that he was leaving the Irish airline at the end of this year.

It is understood that Mr Bellew continues to work at Ryanair. His notice terms oblige him to remain with the company until the end of the year.

In a call with industry analysts last week, Ryanair chief executive Michael O’Leary noted that the airline was in talks with Mr Bellew over his six-month termination period. On the same call, Mr O’Leary said he could not comment on his colleague’s departure for legal reasons. He pointed out that all Ryanair senior managers’ contracts barred them from working for rival airlines for periods after leaving the Irish company.

“They have a pretty extensive noncompete agreement, which arise from the share option schemes that they have agreed and received over a period of time,” Mr O’Leary said.

“I would not expect any senior manager in Ryanair to be moving to a competitive airline for a reasonably long period of time. And that applies to me, it applies all the senior management team.”

Mr O’Leary indicated that there would be “no movement” from Ryanair on its non-compete clause in Mr Bellew’s case.

Mr Bellew was tipped as a possible successor to Mr O’Leary when he returned to Ryanair in December 2017 following a stint as chief executive of Malaysia Air.

He originally worked for Ryanair between 2001 and 2014, rising to director of flight operations by the time he left for the far eastern airline,where he first served as deputy chief executive.

Ryanair and Easyjet did not comment on thelegal action on Thursday. – Additional reporting: Reuters