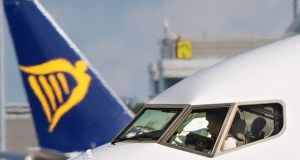 Any hope that Ryanair’s decision to recognise trade unions might lead to warmer relations between management and employees seems to have been extinguished.

Having borne costs in the region of €120 million due to a series of strikes in the Republic and elsewhere last year, the airline finds itself facing more turbulence as pilots in Ireland, Portugal and the UK prepare for industrial action later this month and into September.

Ryanair recently told staff that it might have to cut up to 900 pilot and cabin crew posts this winter on the back of stalled aircraft deliveries, Brexit fears and rising costs. But any hopes this might get pilots to cool their jets have dissipated.

Members of the Irish Airline Pilots’ Association – a branch of trade union Fórsa – directly employed by Ryanair, voted on Friday to take industrial action in a dispute over pay.

Some industry insiders claim the carrier was surprised by the move, given that it has been in talks with the union on an ongoing basis with mediation led by former director general of the Workplace Relations Commission, Kieran Mulvey. The last meeting between the two sides was in late July with the union reportedly asked to come back to the table with specific pay proposals.

The airline recently increased pay by 20 per cent but the pay claim submitted earlier this year is separate to the issues over which pilots held a series of strikes last year.

Ryanair claims to be in the dark as to what Fórsa wants, as according to one insider, “all they have is a list of generalities”. The source also claimed that talks with unions have to date been little more than “an exercise in vagueness”.

The union for its part has expressed continued anger at Ryanair over what it says is the airline’s unwillingness to move on its claim.

The two sides are due to meet again next week. Whether industrial action can be averted remains to be seen. One thing is for sure though. Closer relations between management and staff are a long way from taking off.