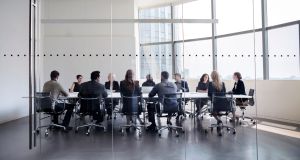 And then there were three. The appointment of geologist Fiona MacAulay to the board of commodity trading and mining group Ferrexpo slashes the number of FTSE 350 companies with all-male boards by a hefty 25 per cent.

That’s a lot better than the 15 Irish-listed companies that have no women on their boards, but it’s still too many. And it flies in the face of the UK government’s order that women should make up a third of board members among Britain’s 350 largest listed companies by 2020.

While the overwhelming majority of Ftse 350 companies now have women on their boards, it seems many are making only a token effort, with an attitude of “one and done”. Almost 50 Ftse 250 companies have a sole female board member.

It is highly unlikely that the overall one-third target will be met by 2020, although the larger companies have stepped up. Female board representation among Ftse 100 companies is running at more than 30 per cent and will be boosted by the widely expected appointment of Alison Rose as chief executive of Royal Bank of Scotland in the coming weeks.

Millions of British commuters, still seething from the rail chaos of recent weeks, will learn today how much more they will have to pay for their journeys to work.

Government-regulated rail fares will rise in January, but the increase is based on inflation data for July, which will be released this morning. However, the benchmark figure is not the government’s preferred cost-of-living measure, the consumer price index (CPI), but the flawed and widely discredited retail price index (RPI).

The bad news for season-ticket holders and other commuters is that RPI is running significantly ahead of CPI, and thus prices are set for another inflation-busting increase of almost 3 per cent.

Although CPI is expected to have fallen to about 1.8 per cent last month, RPI is forecast at 2.6-2.9 per cent. At the upper end, that would add more than £100 (€108) to the annual cost of travel for hundreds of thousands of commuters.

Given the problems of overcrowding, together with the rail network’s poor record on cancellations and punctuality, there’s always a row when price rises are revealed.

But this year, memories of the carnage caused by the July heatwave are still horribly fresh in the minds of long-suffering commuters, who had only just recovered from the chaos created by the bungled launch of new timetables the previous year.

At the peak of last month’s heatwave, when temperatures topped 38 degrees, some rail operators advised people to stay home and not even attempt to travel. Hundreds of trains were cancelled amid fears that rails would buckle and overhead lines would collapse.

“Extreme weather action teams” were dispatched to paint some stretches of track white in an effort to reduce the temperature. And those services that did run were severely disrupted as speed restrictions of 20 miles per hour were imposed on some routes.

According to calculations from the union body, rail fares have risen twice as fast as wages in the past 10 years, at 46 per cent compared with 23 per cent. And the TUC analysis shows that UK commuters spend up to five times more of their salary on rail fares than passengers in other European countries.

Rail unions will once again be demonstrating at 30 stations around the country as the new fares are announced. Commuter groups, meanwhile, are warning that continued price rises will drive travellers away from the rail network, which will do little to improve the economics of the industry.

And there’s another big threat to rail infrastructure: climate change.

It emerged during the heatwave that Network Rail, which is responsible for Britain’s 20,000 miles of railway track, stress-tests steel rails at a temperature of 27 degrees. That was perfectly adequate for the height of summer in previous decades, but looks dangerously outdated in the age of climate change.

As temperatures continue to climb, it’s not just the steel tracks that will buckle under the strain.