Airline says it is ‘disappointed’ with the ballot, and claims it has ‘no valid mandate’ 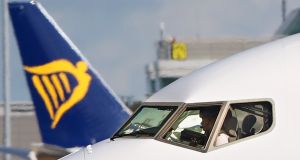 Directly-employed Ryanair pilots based in Ireland are likely to strike after voting overwhelmingly to back industrial action in a dispute over pay.

Members of the Irish Airline Pilots’ Association (Ialpa) – a branch of trade union Fórsa – were balloted on Friday over the proposal, and backed it by a margin of 94 per cent.

The result of the ballot means pilots in Ireland at the airline are likely to strike, although the timeframe is as yet unknown.

The vote adds to the airline’s industrial relations woes, with UK pilots set to strike later this month over pay issues, while Portuguese and Spanish cabin crew are pursuing their own separate claims against the company.

Fórsa, which is required to give at least one week’s strike notice, said it would write to management early next week to outline plans for action unless the airline agrees to union pay proposals by Monday.

A spokesman for Ryanair said the airline was “disappointed” with the result of the ballot, and said the threat of action had “no valid mandate”.

“This Fórsa threat of industrial action has no mandate from Ryanair pilots, and is ill-timed just 10 weeks before a hard Brexit, while Ryanair is in the process of letting excess pilots go due to the Boeing Max delivery delays.”

Fórsa submitted a pay claim to the company in late March 2019, seeking pay levels and structures it said were “in line with sector norms”.

It said the airline, which posted profits of €1 billion last year, was in “a healthy financial position and can fairly reward its pilots”.

Fórsa said Ryanair management “has stalled in negotiations” on pay and related matters since Ialpa submitted its claim. “The airline has made no formal counter-proposal,” it said.

Fórsa assistant general secretary Ian McDonnell said industrial action could be avoided if management at the airline engaged “professionally and constructively” in talks.

“Ryanair’s directly-employed Irish-based pilots are simply seeking pay levels that are common and competitive in the commercial airline sector, from a company that made a more-than-healthy profit of €1 billion last year,” he said.

“They feel they have been forced into contemplating potentially disruptive industrial action by a company that seems either unwilling or unable to negotiate in a professional and constructive manner.

“At this stage only a substantive counter-proposal, which properly addresses all areas of our claim, will be enough to prevent us serving notice of industrial action next week.”

Some 180 directly-employed Ryanair pilots based in Ireland, who are members of Ialpa, were eligible to vote in the ballot. Ryanair pilots employed by agencies were not balloted.

Fórsa spokesman Bernard Harbor told RTÉ radio’s News at One that the size of the mandate highlighted to extent of the frustration of pilots. “This is a situation we don’t have to be in. This is bad news for passengers, for the economy and for staff.”

Fórsa said it would not be making further comment before next week so as to give management space to respond to its claim.

During industrial unrest last year Ryanair said it paid captains between €140,000 and €200,000 annually, but unions disputed those figures.

Members of the British Airline Pilots’ Association intend to strike on August 22nd and September 2nd as they pursue a separate pay claim.

Cabin crew in Portugal plan a five-day stoppage beginning on August 21st in a dispute over leave entitlements.

Flight attendants in Spain will strike in September after Ryanair revealed it will close two bases in the Canary Islands and consider shuttering one in Girona.

Ryanair’s main pilots union in Spain will vote in the coming days on possible industrial action, including going on strike, in response to planned job cuts , the local Sepla trade union said.