Ryanair cabin charges: what do the changes mean for you? 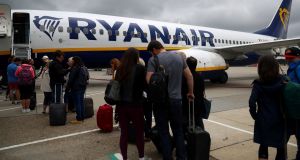 It seems like no time at all since Ryanair last decided to change its baggage policy. Indeed it was only in January that the Irish airline delivered its most recent missive, banning travellers taking cabin baggage on board unless they paid the extra priority charge. Now however, barely eight months later, it has changed its policy yet again.

So what do the latest changes mean?

What are its current rules on hand luggage?

Since January, Ryanair has allowed passengers who don’t pay the priority fee (€6/£6) travel with two pieces of hand luggage for free -one small handbag, and one small suitcase. However, only those priority passengers were allowed bring their luggage on-board; while everyone else could travel straight to the gate, without having to queue at departures to drop off their luggage, these bags were then gathered at the foot of the plane and put into the hold. The inconvenience for passengers meant that they couldn’t just disembark with their suitcases to hand; they would then have wait to collect their bags on the conveyor belt once they arrived at their destination. On the flip side, it did mean that planes could be boarded and exited faster - a boon not just for the airline, but also for passengers.

How has this changed?

Now however, the airline has changed its strategy once more. From November 1st, passengers will only be able to bring one small bag - ie a hand-bag or lap-top bag - on board with them for free. Parents will still be able to bring a small (5kg) baby bag for free with them when travelling with a baby.

Will it cost me more?

Unless you can travel abroad with little more than your wallet, passport and a change of underwear and a pair of shoes, the new rules are going to hit your pocket. So, if you want to bring a bag bigger than a hand-bag with you, you will have to pay from November 1st. Your options will be to either book a flight as a priority passenger (€/£6), which will allow you continue as before, bringing two bags for “free” onboard, or pay a charge for the 10kg bag (€8/£8), which will be checked into the hold.

Now the airline says it is trying to smooth the switch by allowing you to bring bigger bags onboard. This means that it has increased the size of its “small” bag, which was previously just a back-pack or hand-bag from 35 x 20 x 20cm to 40X20X25cm (see picture). It has also almost doubled the size of its “sizer”, which allows room for these bags to expand to almost 25 per cent more than the small bag allowance.

While this is definitely more generous than before - an increase of 40 per cent in fact - it may still be difficult for even the most careful of packers to head off on a weekend trip with.

Why don’t I just book priority then?

Booking as a priority passenger costs €/£6 - which is cheaper than the cost of booking your bag separately (€/£8), and also allows you to avoid having to check the bag in.

The airline however says it doesn’t expect everyone to pick priority “because some customers don’t want to carry a bigger bag through airport security”.

In any case priority boarding is capped, at 95 customers per flight (out of 189 guests), which means that not everyone will be able to get it.

According to Ryanair, allowing passengers to bring a second bag to the gate has been causing “flight delays”. Now you would think they would have known this before, but it seems not. Indeed in its press statement the airline said that allowing passengers bring their bags to the gate “led to the tagging of up to 120 free gate bags which caused delays to 25 minute turnarounds.”

But I’ve already booked my flight?

While the new bag policy kicks off on November 1st, it will start to impact non-priority customers who booked flights before September 1st, for travel after November 1st. This means, for example, that if you booked a flight in August to go to Spain in December, you will have to go back to your booking and add priority boarding for €/£8 or a 10kg bag for €/£10. “Or they may cancel their booking for a full refund” the airline says.

Is the airline going to make more money from the change?

Apparently not. It says, in fact, that it will make “nothing”.

“We expect more customers will switch from the current € /£25 checked bags to this cheaper € /£8 checked bags,” it says, adding that the revenue lost “will outweigh more customers switching to priority boarding which is capped on each flight”.

It also expects that more non-priority guests will choose to travel with just one free (small) carry-on bag.

What if I don’t book my bag in?

As always, you can expect to pay significantly more if you wait until you get to the airport to pay for your luggage. According to Ryanair, you will be charged the gate bag fee of €/£25 should you arrive with your wheelie bag to the gate.

And if you rock up to the gate with a free “small” bag which is substantially bigger than it should be, again you will have to pay €/25 for it.