Ireland has had busiest summer yet for Airbnb rentals 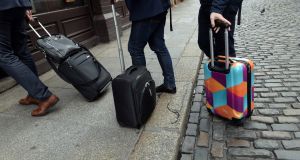 The most common customers availing of Irish Airbnbs are American, followed by Irish people themselves and then those travelling from the UK, France and Germany. File photograph: Cyril Byrne

Ireland has had its busiest summer yet for Airbnb rentals with about 640,000 “guest” stays expected over the season.

The company said this level of bookings should bring in about €57 million to the Irish economy, with those renting out rooms and properties reaping €2,000 on average for the summer period.

The data released by the US company is in relation to bookings over the period from June 21st to September 22nd and is expected to rise as more bookings are made.

Aisling Hassell, its global head of community support operations, said the data reflected the growth in Airbnb use in Ireland over recent years.

“This data on this summer’s activity alone shows that the popularity of Airbnb continues to grow steadily in Ireland, with guests choosing to stay in the many villages, towns and cities across the country,” she said.

The most common customers availing of Irish Airbnbs are American, followed by Irish people themselves and then those travelling from the UK, France and Germany.

Dublin and Galway are the top two most popular destinations, followed by Killarney, Cork and Dingle. Families make up almost a quarter of those using the service.

Airbnb became available in Ireland in 2010. Between November 2016 and November 2017 approximately 1.2 million people travelled in Ireland using the platform, with almost 90 per cent visiting on holidays.

Listings of available accommodation in Ireland range from entire lighthouses on the coast to family-friendly barns, spare rooms in cities and typical suburban homes.

Despite its ever growing popularity, traditional visitor accommodation in Dublin does not appear to be feeling a squeeze. Figures published by travel research company STR last month showed hotels in the capital put in a record-breaking performance in the second quarter with average daily room rates jumping 9.5 per cent year-on-year to almost €156.

The new Airbnb figures however have prompted Labour Senator Kevin Humphreys to call on Minister for Housing Eoghan Murphy to act now and regulate the sector. “There are an incredible number of properties across Ireland, especially in major cities like Dublin, which are being used exclusively for short-term Airbnb rentals, while the scarcity of medium to long term lets for working people has led to the worsening of the housing crisis,” he said.

“The Minister for Housing has had a report on his desk for six months with recommendations on how we can regulate Airbnb and bring more dwellings back into the standard rental market. Such regulations have been seen in many European cities such as Berlin.

“I am calling on the Minister to publish this report and act now to curb the worst excesses of Airbnb. There are innumerable families, and single persons, looking for medium term rentals, with a high concentration in Dublin. While the government plans for house building are lagging behind its own targets, regulating Airbnb is one thing Minister Murphy could be doing to help renters,” he added.