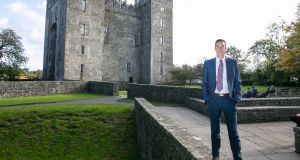 It may have been one of the hottest summers in quite some time, but the good weather has been a challenge for the operator behind some of the country’s most popular tourist sites, as it gears up for continued growth.

“It’s been a bit of a mixed bag,” said Niall O’Callaghan, managing director of Shannon Heritage, adding that bad weather earlier in the year, combined with a hot summer, which has seen domestic tourists bypass such attractions in favour of the beach, has been a challenge.

Nonetheless, visitor numbers have still risen, up by 1 per cent in the eight months from January, and by 3 per cent over the summer period. It means that some 511,000 tourists have visited its eight sites across the country, which include the GPO in Dublin, Craggaunowen in Co Clare and King John’s Castle in Limerick city. Bunratty Castle is still the biggest attraction, with some 250,000 tourists visiting the folk park, fairy village and castle last year.

A commercial semi-State body, Shannon Heritage, which is part of the Shannon Group, is one of the oldest tourist operators in the country. It launched back in 1963 with the medieval banquet at Bunratty Castle, which it still runs today.

Last year was the best year ever for the banquet, which remains largely of interest to foreign tourists – typically 90 per cent of visitors come from overseas, many of them from north America.

Today, however, the group has expanded beyond its original mid-west imprint, and is targeting expansion right across the country.

Shannon Heritage receives no State funding, and it now runs eight sites across the country, having won contracts to operate sites at Malahide Castle and the 1916 exhibition at the GPO. Most recently, it won the tender to operate Newbridge House in Donabate from Fingal Co Council, and O’Callaghan says the strategy is to bring 14 sites under its control by 2021.

“We want to apply our expertise outside the midwest region, and we saw an opportunity to partner up with other State entities,” he said, adding that Shannon Heritage is also considering possible opportunities to link up with private tourism operators.

“We do see potential there,” he said.

Shannon Heritage, which employs 350 people during the peak season – shrinking to about 145 full-time all-year-round employees, tries to target as many demographics as possible. North America remains “hugely important”, and has benefited from the new route from Toronto to Shannon Airport .

“It has really helped our business,” O’Callaghan said.

Also beneficial has been the 9 per cent VAT rate on tourism, and O’Callaghan is hopeful this will be retained in October’s budget.

“A key one for us would be to retain the VAT rate at current levels; we don’t want to be in a position where prices will increase for visitors,” he said.

Irish tourism attractions have been criticised for being overly expensive; a recent Irish Times survey, for example, found that a family of four could attend the Versailles Palace outside Paris for less than a visit to Bunratty Castle.

However, O’Callaghan is keen to assert that “the perceived value is not the price that you see on the front door”, and he notes that one way families can save is by signing up for annual membership. This allows a family, of two adults and up to four children, get access to six of the group’s tourist sites, including Bunratty, the GPO and Malahide Castle, for €125 a year.