Ryanair too slow to come out of its steep learning curve

Cantillon: Airline needs to learn the rules of engagement, but unions must tread carefully 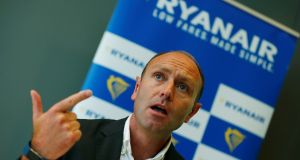 Confirmation that Ryanair’s German pilots have decided to join a day of action planned for this Friday by colleagues in Ireland, Belgium and Sweden raises the stakes at the Irish airline.

While the previously planned stoppages – which include about 100 of the company’s 350 Irish pilots – had seen 146 flights planned for Friday cancelled across the three countries, the decision by the German VC union will mean that another 250 flights are affected.

Ryanair’s industrial relations learning curve in recent months has been remarkably steep. Pilots clearly feel the airline is vulnerable and that now is a good time to press their case on a series of issues. But Ryanair, for its part, has been uncharacteristically slow to adapt to its changing environment.

Having acceded to demands that it recognise unions in countries across its network, it has been lead-footed, even clumsy, in adapting to the rules of modern industrial relations across multiple cultures.

Faced with a fifth stoppage in Ireland, it only conceded mediation – since accepted – too late to avert the strike this week, in an action that that has since mushroomed internationally.

And it repeated that mis-step in Germany. Ryanair’s chief marketing officer Kenny Jacobs said the airline had sent VC a revised proposal on a collective labour agreement. But that was only last Friday. By that stage, the union’s position was sufficiently entrenched that a shutdown was almost inevitable.

In both cases, the airline has highlighted the not-inconsequential salaries of the striking staff. To date, that move has delivered no returns – with the pilots, their colleagues or the general public, including those discommoded in this peak holiday season.

There is no turning back the clock. Ryanair will do business with its unions but it needs to learn the rules of the game quickly so that it can preserve its reputation for reliability and decisive management.

For their part, the unions would be wise to tread cautiously. They may have Ryanair over a barrel just now but that will not be the case for ever. And when Michael O’Leary’s team do get familiar with the rules of engagement, they are capable of being just as ruthless and more.

But for now, caught in the middle, as always, are the passengers. And they, too, might have long memories. A cheap fare is a bargain only if you have faith that it will be honoured.