Cafe en Seine to reopen in November after €4m facelift 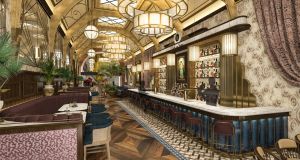 A computer-generated image of the renovated Cafe en Seine

The pub first opened in 1993 and boasts one of the largest bar spaces in Ireland. The renovated building on Dawson Street will “offer an extensive food menu”, according to its owners.

Spread across seven areas, the bars will serve high-end beers, spirits and cocktails as well as standard drinks. The building will also now have an “indoor-outdoor” street garden, while the botanical bar dining area will have its own entrance on Anne’s Lane at the building’s rear. The conservatory-style garden will feature a retractable glass roof.

The building will also have event spaces for corporate bookings, with customers able to avail of their own private bathrooms and smoking areas.

“A lot of thought, research and planning has gone in to the redesign of Cafe en Seine,” said David Murray, the bar’s general manager. “We are one of Dublin’s most iconic venues and we want to continue that legacy for many years to come.”

The venue is owned by the Mercantile Group, which is investing €30 million in a refurbishment programme across its venues. Other Mercantile properties include Whelan’s and Opium.

It was formerly part of the Capital Bars chain run by brothers Des and Liam O’Dwyer and was listed on the stock market for a time.