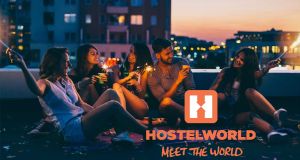 Irish travel website Hostelworld says the unusually hot weather in Europe this summer has led to a “softness” in bookings.

“If these trends continue like for like, growth in group bookings is likely to be flat for the full year given the expected declines in our supporting brands,” newly appointed chief executive Gary Morrison said.

The company’s latest interim results show group revenue fell by 9 per cent to €42.6 million in the first half of 2018 as a result of the impact of deferred revenue.

Some €4.2 million of revenue generated during the period from free cancellation bookings has been deferred and will be recognised, net of cancellations, in future periods, the company said.

Nonetheless, the firm insisted the figures were in line with expectations. It also noted that group bookings grew by 2 per cent to 4 million during the period while hostelworld brand bookings were up 6 per cent.

“Overall, our first half results were in line with our expectations,” Mr Morrison said.

“As previously reported, the market, particularly in Europe, is increasingly competitive,” he said. “In addition, the World Cup and the unusually hot weather in Europe have also led to a softness in bookings in the peak summer months of July and August,” he added.

In a note on the results, stockbroker Davy said: “Hostelworld is in a period of transition and a new management team [including the announcement of a new chief financial officer], enhanced product flexibility and significant growth through the app channel provide a solid base for mid-term growth.

“However, a softer booking trend in July and August [key months for the business] means that nearer-term expectations will be scaled back – for 2018, we expect a 11 per cent downgrade to consensus forecasts,” it said.