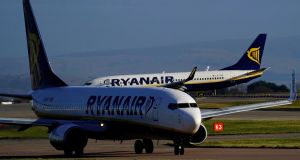 Shares in the Irish airline rose by just over 7 per cent in early trading in Dublin after news of the deal was confirmed. Photograph: Reuters/Phil Noble

Shares in Ryanair rallied from near two-year lows on Thursday after the company confirmed it had reached a deal with trade union Fórsa in talks over the pilots’ dispute at the airline.

The agreement followed a 22-hour negotiating session which began on Wednesday morning and concluded on Thursday morning.

The proposed deal will now go to ballot, with a recommendation for acceptance from Fórsa and its Ryanair pilot representatives.

No details of the agreement have been publicly disclosed with facilitator Kieran Mulvey having asked both the airline and the union to refrain from discussing the deal while the ballot is conducted.

The ballot is expected to take two weeks to organise as pilots are on different work patterns and are thus not all in the same place at any one time. While it is not known how many pilots are likely to vote in favour of the deal, the fact that Ryanair pilot representatives have backed it should help it cross the line.

Shares in the Irish airline rose by just over 7 per cent in early trading in Dublin after news of the deal was confirmed. The stock ended the day up 5.5 per cent to €13.87.

About 100 of Ryanair’s 350 Irish-based pilots staged five one-day strikes at the company over the past few months in the dispute which revolves around base transfers, promotions, leave and other issues.

Ialpa-Fórsa is seeking a transparent system for dealing with the matters in dispute, which are tied to seniority. Ryanair has previously said it had agreed to nine of the 11 demands originally laid down by the union.

The Irish Airline Pilots’ Association (Ialpa) – part of trade union Fórsa – had pledged not to serve notice of further strikes on the airline while mediation was under way.

Ryanair passengers across Europe have suffered hundreds of flight cancellations this summer because of protests by pilots over slow progress in negotiating collective labour agreements, hitting average fares at Europe’s largest carrier.

The airline suffered its worst one-day strike earlier this month after a walk-out by pilots in five European countries disrupted the plans of an estimated 55,000 people at the height of the summer holiday season.

Some of the other Ryanair unions stuck in negotiations around Europe have said they are watching the Irish talks closely, although Dutch pilots’ union VNV said the Irish agreement did not appear to cover all the issues at stake, and was limited to base transfers and promotions.

“We shall have to study the details, but for now we don’t see much in this agreement for us to build on, as we have different priorities,” VNV spokesman Joost van Doesburg said, basing his assessment on documents the union had seen so far.

The Irish Travel Agents Association (ITAA) welcomed the announcement of an agreement between pilots and Ryanair. Its chief executive Pat Dawson said it would give certainty to travellers.

“Since the industrial dispute was announced, thousands of holidaymakers have faced uncertainty with travel plans and often incurred additional costs during the peak tourism season,” said Mr Dawson.

“We look forward to other Ryanair bases, outside of Ireland, also working towards lasting, good industrial relationships with the airline, to reduce strike action and disharmony to consumers,” he added. – Additional reporting: Reuters