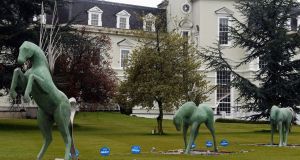 About 100 prospective buyers, many from Asia and the US, have expressed interest in the K Club since its owner, businessman Michael Smurfit, put the hotel and golf resort up for sale for €80 million last month.

Mr Smurfit put the Co Kildare property on the market in mid-July with a guide price of €80 million and instructed real estate specialist Savills Hotel & Leisure to manage the sale.

Tom Barrett, head of Savills Hotel & Leisure, confirmed on Friday that the property sparked the interest of some 100 likely investors, but cautioned that the number of realistic buyers was likely to be far fewer than that figure.

The potential buyers were a mix of tourism and leisure companies, investors and wealthy individuals, some of whom already own similar assets, he added.

Mr Barrett explained that a property on the K Club’s scale was always likely to draw a high level of initial interest.

He said he expected about 30-40 likely purchasers to access the “data room”, a store of important information on the business.

After they have done that, it will be open to them to view the K Club and then consider bidding for the resort. A sale could be expected to take several months.

The courses hosted the 2006 Ryder Cup , the biennial clash between the US and Europe, as well as Irish and European opens.

Along with golf, the 550-acre estate offers guests horseriding, fishing, clay pigeon shooting and other activities.

Hugh Barton, of the Barton and Guestier wine family, built the estate in 1832 and modelled the house on a French chateau.

Following a succession of owners, Jefferson Smurfit, the packaging maker headed by Mr Smurfit, bought it in 1988 and converted it to a hotel and golf course in 1991.

Mr Smurfit and property developer Gerry Gannon bought the K Club from Jefferson Smurfit in 2005, when investor Madison Dearborn took over the manufacturer. In 2012, Mr Smurfit purchased Mr Gannon’s 49 per cent stake in the business for a reported €40 million.