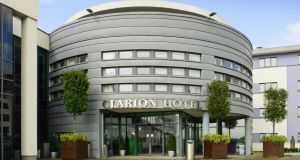 Dalata intends to rename the Clarion Liffey Valley hotel as part of its own-brand Clayton portfolio.

Listed hotels group Dalata will step up its efforts to consolidate the Byzantine ownership structure of the 352-room Clarion Liffey Valley – one of the largest hotels in Dublin – after getting the green light from competition regulators to take control of a large section of the property.

The Competition and Consumer Protection Commission (CCPC) on Tuesday gave Dalata approval for a €62.5 million deal to acquire large sections of two hotels announced in May.

The transaction included a deal for more than half of the rooms of the Clayton Hotel Cardiff Lane in Dublin’s docklands, where it also is the operator.

It also included almost the core of 170 bedrooms at the Liffey Valley hotel, as well as its leisure centre and public areas. The tranche was sold to it by US fund Colony Capital, which bought certain development loans from the National Asset Management Agency.

Dalata will now seek talks on deals to buy the two outstanding, separate ownership blocs at Liffey Valley, to gain full control of the hotel.

After gaining CCPC clearance, the Colony deal is expected to close this week. The next bloc over which Dalata must conclude a deal is controlled by receiver Martin Ferris, and includes several floors of suites owned by ACC Bank.

It is understood a price has been discussed for this bloc, but not finally agreed.

The third, and most complex part of the consolidation, will involve Dalata trying to secure agreement with about 50 individual investors who bought suites at the hotel.

Early contact has been made with these investors, who are being represented in discussions by property group CBRE. But a deal will be tricky to conclude, due to an ongoing row as the investors say they are owed rent.

The four-star Liffey Valley hotel is strategically located just off the M50 motorway in west Dublin, and Dalata intends to rename it as part of its own-brand Clayton portfolio.

The CCPC has told Dalata it must restrict the flow of commercially sensitive information between its owned hotels and competing properties it manages for third parties, as a condition of rubber-stamping the deal it cleared on Tuesday.