Irish sales still struggling, but plans are in place for a turnaround 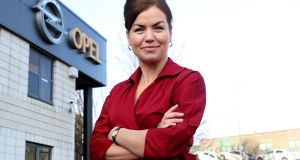 Gillian Whittall, Opel Ireland’s general manager: “The brand share has grown cumulatively for the last four consecutive months. We have plans in place to ensure it continues to do so.”

Opel has turned a profit, something that would have seemed almost inconceivable not so long ago, as the German car brand (and its British Vauxhall offshoot) had long since struggled to stay in the black, under the ownership of American giant General Motors.

Under its new French owners (PSA Groupe - which already owned Peugeot and Citroen, and which bought Opel from GM last year) Opel has announced a profit of €503-million for the first half of 2018, alongside “operational free cash flow” of €1.2 billion.

“We are a completely different company than 12 months ago. We have set the course for even more competitiveness and have already aligned many areas for the future. We are profiting massively from being part of the successful PSA group. We are very grateful for this - and this is also an obligation,” said Opel chief executive Michael Lohscheller.

The journey from loss to profit has been a tumultuous one. Many had assumed that PSA was buying Opel either to strip it for assets, or to turn it into a mere badge-engineering brand (a claim that PSA and Opel officials have repeatedly denied). Others said that the long-ailing German car maker could simply never turn a profit.

PSA seems to have boxed clever, though. It was already half-way along the road of integrating Opel vehicles onto PSA platforms and engines (the two companies were sharing tech long before there was talk of a takeover) and its original deal with General Motors, which saw the American car maker retain responsibility for legacy pensions, must have helped too.

Opel’s move into SUVs has also been beneficial. The Mokka X, Crossland X, and Grandland X may not have garnered the critical plaudits, but between them these three models racked up 167,200 sales in the first six months of the year. The new Insignia saloon seems to be moving too - selling 7,092 units across Europe in May, compared to 4,091 a year ago.

Opel is also launching something of a product offensive, with a new Corsa due by 2020 (including an all-electric version, one of four fully electric cars Opel intends to introduce by then, with more to follow by 2024) and more variants of the existing lineup. There will also be a still-unrevealed large seven-seat SUV range-topper within the next couple of years. By 2024, the full Opel range is expected to be built on just two basic chassis platforms, shared with PSA.

PSA’s plans for Opel could have some major bumps in the road ahead though. There are plans afoot to sell off some of Opel’s research and development sections, based at Russelsheim in Germany. With some 4,000 jobs on the line there (in addition to workforce cutbacks of 3,700 which have already been made) unions will be using the new-found profitability to put the squeeze on PSA not to make further cuts.

As for Ireland, passenger car sales for Opel are down by 30 per cent so far this year, although the brand is doing somewhat better if you add in its performance in the commercial vehicle sector.

Gillian Whittall, Opel Ireland’s general manager told The Irish Times: “We are already delivering the turnaround for Opel in Ireland. The brand share has grown cumulatively for the last four consecutive months. We have plans in place to ensure it continues to do so.”

Success for Opel in Europe is good news, and somewhat unexpected news at that. Bringing that success back to Irish shores could be a tougher task again.