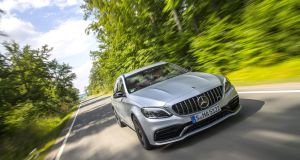 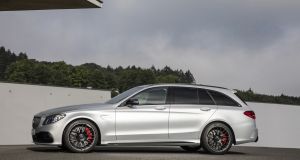 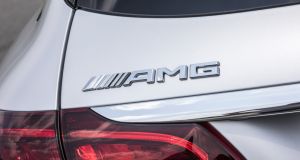 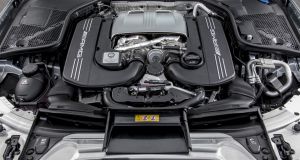 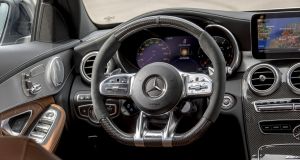 There is something deliciously subversive about driving an estate car with this much grunt. Fast estates are nothing new, of course – Audi all but perfected the breed with the original RS2 back in the 1990s – but the extra metalwork and glass out the back just seems to add another layer of Q-car disguise.

We have recently sampled the updated Mercedes-Benz C-Class, both in conventional petrol and diesel forms, as well as the medium-hot V6 turbo C43 AMG. Now it’s time for the ultimate . . .

The Mercedes-Benz AMG C63 has been the best-selling AMG-badged model for some time. That’s hardly surprising – wondrous though the bigger E-Class is, who could fail to be swayed by the charms of the smaller, but still insanely rapid, C-Class? The badge is more than ever a misnomer, though. The 63 bit was a deliberate sic erat scriptum when there was a naturally-aspirated 6.2-litre V8 engine on board, but Mercedes is really stretching the concept of rounding-up to its very limits now that the C63 uses a 4.0-litre twin-turbo V8 engine.

That is, of course, the same engine that you’ll find the the E63 AMG, in the mighty AMG GT Coupe, and in distantly related form in the Aston Martin DB11 and Vantage. It may not have the cubic capacity to back up its badge, but it certainly has some form.

Some noise, too. The turbo-chargers are mounted between the angled cylinder banks (what Mercedes calls a “hot-vee” configuration) for faster response, and, depending on whether you go for the standard C63 or the rortier C63S, you can have either 475hp or 510hp, and as much as 700Nm of torque. That’s enough to push the lightest Coupe version to 100km/h from rest in just 3.9 seconds, while our estate test car takes a barely-any-slower 4.1 seconds. While the eight cylinders clearly feed on a diet of petrol, you’d swear that the engine was mostly powered by its own noise. Want to make Formula One cars sound good again? Simple – mandate this V8 engine as the standard powerplant.

Even bumbling about in Comfort mode (adjusted by a Porsche-style rotary switch nestling within the steering wheel spokes) the V8 growls and grumbles like Orson Welles on a cold morning. Dial it up through Sport and Sport+ and extra depths of baritone are revealed. Its’s not all low-down growl, though. Rev it out to the redline (choose your moment to do so carefully) and it howls like a frontline racing engine, that warm woofle transformed into an angry, hard-edged bark. That’s followed by a cannonade of pops and bangs down the exhaust if you have the “loud” button pushed – which is childish, of course, but childishly entertaining.

Loaf about in Comfort and the C63S feels quietly potent. It’s without question the best setting for on-road use, as not only does it keep the adaptive dampers in their softest setting (there is thankfully the option of keeping them soft if you’re in Sport or Sport+ modes) but the slightly slower responses of the engine and the new nine-speed dual-clutch automatic gearbox (which now gains wet-clutches to help it better cope with the AMG’s power) seem better calibrated to normal driving. I say normal – this is still a savagely fast car, able to dispatch slow-moving trucks, caravans, and probably any local Le Mans cars with a careless flex of the foot. If you’re going to drive one of these every day, you’d better have a Teflon licence.

Or access to a race track, of course. Mercedes was kind enough to give us the run of the Bilster Berg track in Germany. It’s a private “race resort” track, designed to allow car-makers and wealthy owners the time and space to exercise their high-performance machines, and its hilly layout means you’ve almost always got a windscreen full of either sky or tarmac. Here, the C63 is simply mighty.

Even a clogger such as I can make this car dance on a track, so friendly and welcoming is its chassis

Activate Race mode (only available on the 510hp S model and most definitely not recommended on the road) and the little rotary controller switches to a traction control switch, with which you can dial up less or more electronic assistance, depending on your level of skill and the soakage qualities of your underwear. A low number on the dial means more help from the car, a higher number means greater potential for disaster.

Or so you’d assume. V8 AMG cars are supposed to be lairy and scary, right? Well, not this one. Oh sure, dial up a high T/C number and the C63S will slip and slide sideways at will, vaporising as much rear rubber as you like. But it’s all down to you and how you want to do it. Take a classical slow-in, fast-out approach and the C63S is entirely benign, with fantastic steering telegraphing a great deal of feedback through its part-suede rim. Even a clogger such as I can make this car dance on a track, so friendly and welcoming is its chassis. I daresay on a wet road or track, this tale would be slightly different, but in the dry the C63S AMG is one of the friendliest cars ever to have a 500hp+ power rating.

The AMG version gets the same updates as the rest of the C-Class range, so you can have new all-digital instruments, a bigger central “Command” infotainment screen (which has its own data-logging telemetry system so that you can see a graph of exactly how and when you rolled upside down into a gravel trap) and some improved cabin trim. The 63 is also slightly longer at the front, to accommodate extra cooling for the V8, and unlike the E63 there’s no option of four-wheel drive, so this could be called the purists’ model.

You can have it as a saloon, Coupe, Cabriolet, or this estate version – and this estate version is the one you want. It’ll swallow every chattel of everyday life (460-litre boot) and then proceed to mince all of those chattels against the rear window under lung-compressing acceleration. It’s mad, it’s bad, it’s some kind of wonderful.