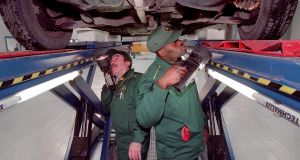 The company that operates the National Car Test (NCT) has been given a six-month extension to its contract by the Road Safety Authority.

Applus Car Testing Service won a 10-year contract for the NCT which was due to expire in December 2019.

However, the RSA said this has now been extended until July 1st, 2020.

The specific reason for the extension is unclear.

RSA chief executive Moyagh Murdoch told the board earlier this year the extension “will confer significant practical and operational benefits to the authority, taking into account the complex service transition and handover to a potential successor”.

The new 10-year contract is worth an estimated €700 million to the winning bidder and will be awarded to a single firm.

The RSA has issued a prior information notice for the NCT contract on the European tending website, eu-supply as part of its approach to the issuing of the tender, which it says will be done under a “restricted procedure” basis.

This means that the contracting authority, in this case the RSA, is of the view that only a limited number of suppliers can satisfy its specific needs. When the contact was last issued in 2009 three firms submitted a bid.

The RSA also said the proposed 10-year term may be altered following a market-sounding exercise.

One issue that will have to be addressed by the new NCT operator is the rapid development of driverless cars and how these will be accommodated by the NCT service.

The RSA said it was constantly seeking to improve the “quality and consistency” of car testing.

This was a 51.9 per cent increase compared with the previous year and was based on expanding revenues from NCT and Vehicle Registration Tax (VRT) inspections.

Applus employed 847 staff in Ireland in 2016, down slightly on the previous year, and had staff costs of €34.7 million.