As in 2008, changes to the motor tax regime can have unfortunate unintended consequences 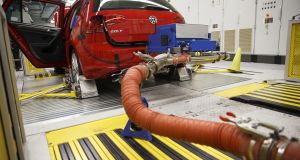 The idea of a usage tax on private motorists seems eminently sensible on paper, but Government policy doesn’t exist in a vacuum. The reality is that many of the private motorists impacted by such a scheme are those who have been hit hardest by policy failures in other areas of the economy.

Many of these commuters were forced to move to rural areas due to the shortage of affordable housing. Having struggled with mortgage repayments on properties hit by negative equity, their commute isn’t helped by a lack of adequate investment in rural public transport during the recession.

These commuters often struggle to afford newer cars with the latest improvements in fuel efficiency, the lowest emissions and the lowest tax. In fact, the rapid improvements in efficiency and the kickback against diesel is most likely making their current car more obsolete, devaluing it on the used car market and making it even more costly for these motorists to trade up. These are the citizens who will be hit hardest by any taxes based on how often they use their cars.

It shouldn’t be forgotten that there is already a tax on usage, in the form of a 58.77 cent per litre excise and carbon tax on petrol, and a 47.9 cent per litre charge on diesel. Replacing this with a blunt usage tax seems to abandon the efforts to get people to buy more fuel efficient cars.

The review of the current motor tax regime, and the suggestion of a usage tax, is seemingly driven by the advent of electric cars. At present they represent a minuscule portion of the private car fleet. As of the end of last month there were 3,830 fully electric cars on our roads. This is out of a total private car population of more than two million.

Even with promises of a surge of new electric models coming onto the market from next year, it will take several years before they make up a sizeable proportion of the total fleet. Over 75 per cent of the private cars on our roads are four years old and over, with over 64.5 per cent six years and older. The owners of these vehicles are unlikely to be able to afford to trade up to the latest technology in the short-term.

There were proposals last year to bring excise tax on diesel in line with that on petrol. A report last month from the Department of Finance’s Tax Strategy Group now suggests the tax between the two fuel types could be equalised over a five-year period.

The irony of moving the excise tax towards usage is that it removes the incentive for high mileage commuters to make the move towards more fuel efficient models.

The last census in 2016 showed 61.4 per cent of working commuters drove to work, rising to 76 per cent in rural areas. On average workers lived within 15km of their workplace, but 238,341 lived over 25km away.

Whatever about the long-term implication on tax returns from the advent of electric cars and hybrids, there is a more immediate need to adjust our current emissions-based motor tax system.

A new stricter EU-wide testing regime for car emissions and fuel economy is being rolled out over the next 12 months.

The new stricter tests are part of the fallout of the Volkswagen diesel emissions scandal, where the car giant admitted to fitting cheat devices to create lower CO2 levels during testing. The current regime has been proven as unfit for purpose, easy for car manufacturers to exploit and irrelevant to motorists.

The new EU test regime aims to provide more realistic real-life emissions and fuel economy figures. From September 1st new cars will have to be graded under a partial roll out of the scheme, while the full impact of the new testing system - known as WLTP - will start from September 1st, 2019.

A recent EU Commission report on the impact of the new scheme reckons CO2 values for passenger cars will increase by an average of 21 per cent. However, it’s likely to impact current low emissions diesel cars hardest, with some hit with official emissions figures over 41 per cent higher than at present.

This will have an effect on both the VRT and annual motor tax applied to new cars registered from the end of this month and, in particular, those registered from September of next year.

With the backlash against diesel and talk of diesel bans in some international cities, hybrid sales have risen dramatically in the last two years. So far this year sales are up nearly 62 per cent. Yet regular hybrids still make up just about 28,000 of the 2 million cars on our roads.

And the new testing regime is expected to see the official emissions figures for hybrid cars increase.

According to a recent report by senior officials at the Department of Finance, if this is borne out, it would weaken or undermine the environmental rationale of the relief for conventional hybrids. Currently regular hybrids avail of tax relief of €1,500. The relief for hybrids is estimated to cost the exchequer €19 million this year.

If the Government were to reduce or remove the incentives for conventional hybrids, perhaps this money could go to further incentivising electric vehicles, or the installation of more recharging points. Currently there are 1,200 public charging stations across the Republic.

The reality is that cars are becoming more efficient and combined with a gradual move towards electric power, therefore a tax system dependent on fuel usage and emissions levels is simply not going to raise the same levels of income as at present. In the first half of this year, the exchequer collected €958.9 million in tax on the back of car sales alone.

The problem with changes to the current system is the impact of unintended consequences. The well-meaning move to emissions-based tax in 2008 saw Irish motorists convert en masse to diesel. The swift changeover decimated petrol car sales and values. It has now proved to be wrong-headed on environmental terms as well, leading to a rise in dangerous nitrogen oxides, which have been shown to be carcinogenic.

As European states are busy reversing their pro-diesel policies, so the Irish Government needs to disentangle our current tax regime from the diesel debate. A tax system based largely on usage may seem sensible on paper, but the consequences for commuters will be significant. We need to be careful not to make similar mistakes again.