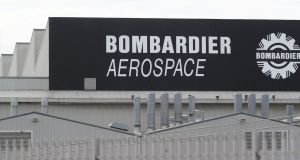 The Bombardier Aerospace plant in Belfast. The company has warned that stockpiling parts to mitigate the impact of a no-deal Brexit could cost the Belfast unit £30m. Photograph: Niall Carson/PA Wire

Contracts awarded by Bombardier’s Belfast operations to suppliers in Ireland and the UK topped £200 million (€224m) last year, according to the Canadian aerospace giant, which has warned that it may be forced to stockpile parts at a cost of £30 million if there is a no-deal Brexit.

Bombardier said its operations in Belfast has a European supply chain of around 900 approved contractors, with more than 800 based in the UK and Ireland.

Michael Ryan, Bombardier’s president of aerostructures and engineering services, has warned that the group might have to stock pile parts in the North to keep production lines going in the absence of a barrier-free trade deal.

Mr Ryan, who also heads up Bombardier’s Belfast operations, which employ around 4,000 people, said the group currently had a “just-in-time” inventory management system in place in Northern Ireland.

This way it avoids paying unnecessary storage costs because it can quickly and efficiently source parts from an established network of suppliers across Europe. If the UK leaves the EU without a trade deal, Bombardier could be forced to move to another system.

According to Mr Ryan, this could result in additional costs of up to £30 million to store parts for its Northern Ireland operations, which he has said was money that could instead be invested in research and development projects.

Mr Ryan told the Press Association: “It’s cash that I don’t have. What we do not have is another £25 million to £30 million to be sitting in a store somewhere, either managing an issue which has happened or because we weren’t able to get clarity on what might happen. That’s not how we can afford to run a business.”

Bombardier said it was working with both ADS, the UK’s trade organisation for companies in the aerospace, defence, security and space sectors, and the Confederation of British Industry to voice its position on Brexit.

“Based on estimates by ADS, leaving the customs union could add around £2.3 billion in new customs costs to the UK’s aerospace, defence, space and security sector. We need a customs arrangement with the EU to allow sectors with ‘just-in-time’ processes to remain globally competitive.”

Alain Bellemare, Bombardier’s president and chief executive, said it had “delivered a strong performance in the first half of 2018, and has strong momentum heading into the second half of the year”.