Spending on used imports up by 14 per cent, according to Fexco 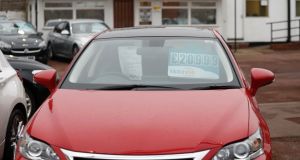 While the volume of car imports is up by 12.56 per cent year on year, the amount spent on those imports has risen by 14 per cent, according to Fexco. Photograph: Adrian Dennis/AFP/Getty Images

While the Irish car market has been swamped by an ever-increasing tide of relatively cheap, used cars imported from the UK, there could be a reduction in the numbers now that the Bank of England has confirmed a long-anticipated interest rate increase.

The bank has raised UK interest rates from 0.5 per cent to 0.75 per cent. More significantly for Irish car buyers, the rate rise could cause a recovery in the value of sterling, which could put a brake on the imports of used cars from the UK.

David Lamb, head of dealing at Fexco Corporate Payments, explained to The Irish Times: “In 2015 the euro-pound exchange rate averaged 72.6p, while in the first six months of 2018 it averaged 87.9p, before surging past 89.5p last week. But with the rise in interest rates, sterling could strengthen in coming weeks.” The pound did indeed rise slightly against the euro in the first hours of trading following the Bank of England’s decision.

The generally accepted wisdom is that the euro-pound rate has to be below 80p before imports will slow down any, so any potential rise in interest rates will have to have a significant effect, not to mention fighting against the tide of apocalyptic Brexit economic predictions.

The spike in the number of imports is almost entirely down to Brexit and its weakening of the UK’s currency. According to Fexco, imports have increased by 66 per cent compared with the first half of 2016, the last period before the vote.

It’s not just private car buyers taking a ferry across in search of a bargain. The Republic’s motor dealers are at it too, keen to stock their forecourts with cheaper cars from the UK. In fact, according to Fexco, Irish dealers have increased their spending on UK imports by 20 per cent so far this year.

That’s based on an analysis of some 3,000 corporate payments made through Fexco, which showed an increase of a fifth of dealers spending their money in the UK market in the first six months of 2018, compared with 2018.

While the volume of imports is up by 12.56 per cent year on year, the amount spent on those imports has risen by 14 per cent, according to Fexco.

Figures from Motorcheck.ie show that, up to July 24th, some 58,503 cars were imported from outside the State in 2018, compared with 51,977 vehicles to the same date in 2017. While the most popular models imported are generally ‘mainstream’ cars, and relatively affordable (the VW Golf, Ford Focus and VW Passat are the top three most imported models), premium cars such as the BMW 5 Series, Audi A4, and Mercedes-Benz E-Class figure strongly in the top 10.

New car sales stood at 108,932 in the same period, so the imported cars number is now looking like a very chunky percentage of the total car sales figure. Given that the number of imports remains relatively consistent from month to month, it’s likely that the total figure for the year will breach the 100,000 mark – uncomfortably close to parity for Ireland’s new car importers.

“On a purchase as large as a car, exchange rates can be a dealmaker or a dealbreaker. Two years on from the UK’s vote to leave the EU, thousands of Irish car buyers – both individuals and garages – are still capitalising on the weak pound,” said Lamb.

“The UK has a much greater supply of used cars than Ireland, so all things being equal, a British used car should cost less than a similar model on this side of the Irish Sea. Historically the cost – and red tape – of importing a UK-registered car into Ireland put off all but professional dealers or the most committed individual motorists. But sterling’s continued weakness has shifted that calculus, and is nudging ever more Irish car buyers to look to the UK for their next car.”

Are you having trouble reading this headline?
10