The distinct allure of the BMW i3 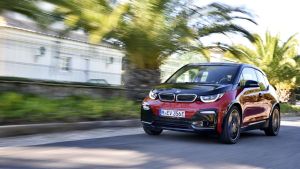 BMW i3: Like the current crop of hybrids on the road, it recycles resistant energy from braking and the like.

As a so-called petrolead I love the electric BMW i3. And I’m not alone. Among the rabble of motoring hacks I encounter across Europe, the i3 has something of a cult following. So much so that several I know have opted for the little electric BMW for their private car, handing over hard-earned cash for a new or used version of the first generation of this car.

When quizzed about it, they all seem to sing the same chorus: this is an exemplar of automotive innovation. Certainly Tesla deserves all the hype surrounding its achievements to date, particularly in terms of its cars’ battery range, not to mention the culture and reputation of its leader Elon Musk. But the i3 also deserves its place on the pantheon of electric car pioneers.

Set aside the fact that it’s electric, the design of the car and its functionality set new standards. Its carbon fibre monocoque – a practical application of engineering prowess from the worlds of Formula One and fighter jets – is revolutionary in that it is now offered on something akin to an everyday affordable car. The i3’s mix of recycled materials, its reverse-opening rear doors, all put this car in the same league as other landmark models in automotive history.

Occasionally a car comes along that fails to become a sales hit, but later becomes something of a collector’s item. Audi’s aluminium A2 from the turn of the century was one such car. Ignored as an oddity by the buying public at the time, it has developed a cult following ever since. My crystal ball forecasts the i3 is destined for a similar fanbase in the near future. An early indication is the surprising number of motoring correspondents I meet who have bought i3s. Admittedly motoring hacks are a very odd lot, men and women who happily while away the hours arguing about alloys: basically eight year olds trapped in overweight adult bodies. But they are also a devoted lot when it comes to cars, so the penchant to the i3 is noteworthy.

The latest i3 comes in three distinct flavours: a fully-electric i3; the latest more “sporty” i3s; and both are also offered with a little 650cc two-cylinder petrol engine that will kick in solely as an old-school generator when the battery runs out. It never powers the wheels directly, and anyone who has ever had to rely on a generator when the power goes out – or when they are camping in undeveloped parts of the world – will recognise the steady putter it emits. It’s not the sound you’d associate with a BMW of the last 60 years. It does, however, add 130km to the range of the car.

The “sportier” i3s is faster by degrees, and BMW engineers talk up the fact it is shorter, lower and wider than the regular car. However, to put these claims into perspective, its 5mm shorter (the width of your little finger), 16mm wider (the width of your thumb), and 8mm lower (you get the picture . . .). If someone can identify the i3s over the i3 based on its size, they are clearly a cyborg and should be given a very wide berth.

The i3s is noticeably faster. Its electric motor boasts an extra 10kw of power, delivering slightly better torque. Acceleration from standing start is the real star. While a 0-100km/h time of 6.9 seconds (7.3 secs for the regular i3) is nippy for a small city car, the real surge is felt in the rush to 60km/h in just 3.7 seconds. That’s where you get the chance to leave everyone else standing at the lights. Electric cars never really do “flat out” well – it drains the battery too quickly – so top speed is limited to 160km/h (150km/h for regular i3).

At the heart of the i3 is a 33kW/h (27.2 kW/h net) battery pack, powering a hybrid electric motor. To put that in perspective, the latest Nissan Leaf claims a battery pack of 40kW/h, the all-electric Hyundai Ioniq’s is 28kW/hs. Step up to the Tesla range and you are dealing with 75kW/h or even 100kW/h.

For the i3s, BMW predicts a range of 200km of everyday driving in Comfort mode. However, like traditional engined cars, this varies depending on driving style, temperature conditions and the like. At one stage, the in-car computer advised us that keeping the air-con switched off could extend our range by 37km. That’s a significant distance if you are on the hunt for a plug socket.

For all the “self-charging” hype in Toyota’s current ad campaign – hinting perhaps at the pipedream of perpetual motion – the i3 range also boasts such magical powers. Like the current crop of hybrids on the road, it recycles resistant energy from braking and the like – similar to the dynamo on your old school bicycle – through the electric motor and back into the battery. It’s certainly not enough to let you forgo the plug sockets, but every little bit helps eke out a few more kilometres of range.

The Irish Times Motors pages have boasted some star performers in recent weeks, with five stars delivered on the latest McLaren and Mercedes C63AMG. Reading this might suggest we are going for a hat-trick, forsaking cynicism or critical thinking in favour of flowery plaudits. Alas, reality bites. As innovative as the i3s is, the bootspace is just 260 litres, which means two handfuls of shopping or a decent suitcase. It’s the equivalent of the rear parcel shelf on many family cars. It can be expanded to 1,100 litres but there’s no escaping its load-lugging limitations. Interior space is certainly improved by the lack of a transmission tunnel running through the middle of the cabin but, for all the free floorspace, BMW could have opted for more cubbyholes and storage space. There’s ample room on the stylish dash, but you can’t really have the loose ends of your life littering the space in front of the driver.

It’s a four-seater, partly because they’ve opted to put cupholders in the middle of the rear seat cushion where a third person would normally sit.

The reverse-opening doors are funky and functional, but there’s a protruding metal lip at the base that always seemed to catch me on the shin.

Many electric rivals, such as the Nissan Leaf or Hyundai Ioniq cost closer to €30,000 (if you don’t mind joining the waiting lists).

And that’s why we can only award it three stars. I long ago accepted I could probably live with an electric car, given my weekly – non-car testing – daily commutes; certainly as a second car and perhaps as a single car if I had easy access to affordable rentals for longer trips. And I could live with this i3.

It’s certainly pushing on four stars and probably deserves its price premium for all the other innovations that are too often overshadowed by the focus on the electric plug socket.

It’s great fun to drive, recharges your self-righteousness, and can be driven without much personal sacrifice in urban and suburban areas.

We only wish it was a little more spacious and a little less expensive.

Range (everyday driving): up to 200km

Now is the perfect time to plan a home refurb, here's why
10