Ryanair pilots to join European strikes at airline next week 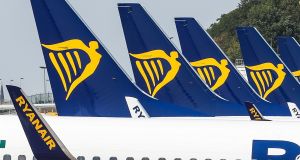 A group of Irish Ryanair pilots will strike along with those in up to four European countries next Friday.

Members of the Irish Airline Pilots’ Association (Ialpa) – part of trade union Fórsa – will hold their fourth strike at Ryanair today in a dispute over base transfers, promotions and leave.

The union, which represents about 100 of the 350 pilots working for Ryanair in the Republic, plans a further stoppage on August 10th, the same day that the airline faces pilot strikes in other European countries.

Pilot unions in Belgium and Sweden have already told Ryanair that they intend to strike on August 10th, while the company believes that those in Germany and Holland could follow suit.

Today’s Irish strike forced Ryanair to cancel 20 of 300 flights but the airline says it has re-accommodated or refunded the 3,500 passengers affected.

The carrier will cancel the same number of flights on August 10th, which it predicted would also hit 3,500 customers, whom it pledged to work to re-accommodate.

Sources warned yesterday that the deadlock between Ryanair and Ialpa-Fórsa could result in the Irish dispute dragging on for several weeks.

Both sides say they are willing to talk but Ryanair is refusing to meet while strikes are planned, a condition that the union maintains is unprecedented and was preventing the dispute being resolved.

Ialpa-Fórsa added that Ryanair’s proposal to cut its Dublin fleet from October with the possible loss or transfer of 300 jobs has hardened members’ resolve.

The pair are also divided over 11 conditions that the union has set out as a basis for suspending strikes.

Ryanair says it will implement nine of them, but Ialpa Fórsa argues that the airline changed the wording before agreeing to its own interpretation of the terms.

Ialpa-Fórsa said it had repeated to the company that it was willing to explore going to a third party to aid in resolving the dispute.

Ryanair responded that the threat of a fifth strike rendered “pointless” its offer to meet next Tuesday.

“This fifth unnecessary strike by 25 per cent of Ryanair pilots proves that Fórsa have no interest in meeting Ryanair,” the company said.

Kenny Jacobs, its chief marketing officer, called on the union to explain why it called strikes “rather than negotiate” when the the airline has agreed to nine of its 11 terms.

“Ryanair’s problem in this dispute is that Fórsa are not in charge,” he claimed. “It is being driven by a tiny handful of Aer Lingus pilots.”

However, the union’s position is that its Ryanair negotiating team consists of pilots elected by their peers in the company and Fórsa officials.

Ryanair also argued that a small group of Aer Lingus pilots were working behind the scenes with unions in Belgium, Germany, Holland and Sweden to disrupt its operations there.

Pilot unions in Holland and Germany have yet to confirm if they will strike on August 10th. Ryanair has sent proposals on a collective labour agreement to the German union, VC, ahead of an August 6th deadline set by the organisation.