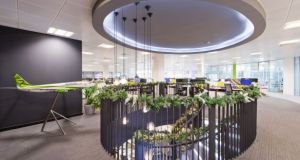 HNA, the Chinese conglomerate unwinding a global acquisition spree, is in advanced talks to sell a minority stake in Dublin-based jet lessor Avolon to Japan’s Orix, people with knowledge of the matter said.

Orix has been discussing the purchase of about a 25 per cent to 30 per cent stake in Avolon from HNA’s Shenzhen-listed arm Bohai Capital Holding Co, according to one of the people. The sale could fetch more than $2 billion, the person said, asking not to be identified because the information is private.

No final agreements have been reached, and there’s no certainty the negotiations will lead to a deal, the people said. HNA has been discussing a range of options, and other suitors remain interested in Avolon, according to one of the people.

HNA has already shed more than $17 billion of assets this year, a pace of dealmaking that reverses a multiyear acquisition spree that saddled it with one of corporate China’s biggest debt loads. That the conglomerate is looking to sell more aviation assets - an area it has defined as core - indicates there is little that HNA considers off-limits in terms of disposals.

A spokesman for HNA declined to comment, while Orix didn’t immediately reply to an email seeking comment.

Bloomberg reported last week that HNA has been exploring options for Avolon, which is the world’s third-biggest plane lessor. Firms backed by Hong Kong tycoons Li Ka-shing and Henry Cheng are among suitors that have held talks about buying a stake or some of Avolon’s aircraft, people with knowledge of the matter said at the time.