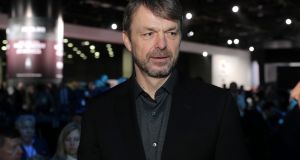 The chief executive of Fiat Chrysler Automobiles says the company is open to restarting merger talks with Renault, in a sign that the aborted €33 billion tie-up could yet go ahead.

Despite significant hurdles to a deal, Mike Manley said the Italian-American carmaker was still “interested in hearing” from its French rival, adding that a combination offers “significant synergies”.

“The industrial logic that was present before, it is still present,” he said. “Should the circumstances change, then maybe dreams come together and things can happen.”

FCA and Renault held private talks for several months earlier this year about combining to form a “European champion” with higher global sales than General Motors.

After the Financial Times reported the discussions in May, FCA publicly launched a €33 billion merger proposal.

The deal fell apart just 10 days later, after increasing exasperation on the part of FCA’s board at the behaviour of the French government, which owns 15 per cent of Renault’s shares and has double voting rights.

The fractious state of Renault’s global alliance with Nissan, which has been shaken by the ousting of Carlos Ghosn, the former chairman of both companies, was also a factor in the talks failing.

“As they work through those things, those circumstances that are necessary to move or change potentially could happen,” Mr Manley said. “If that was the case, we would be interested in hearing from them.”

Mr Manley stressed FCA had a “solid future” as an independent business, but added: “That doesn’t mean to say that, if there is a better future through an alliance and partnership or merger, that we wouldn’t be open and interested to it.”

FCA’s plan is to double profits by 2022 compared with 2018 levels, while pushing into electric cars. The company posted second-quarter profits last week that were 14 per cent higher on the same period last year at €793 million, driven by sales of pick-up trucks in North America.

The business had been stung by the US-China trade war and poor performance in China, forcing Mr Manley to downgrade expectations within days of assuming the post. Shares have fallen by about a third in the past year, trading at mid-2017 levels. – Copyright The Financial Times Limited 2019