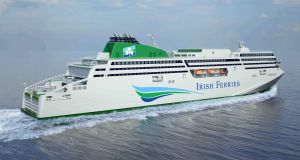 The “contingency” duty-free space was the only design change ICG sought for the WB Yeats.

Shipping company Irish Continental Group (ICG) has set aside space for a post-Brexit duty-free shop on its new passenger ferry, the WB Yeats.

Brussels ended duty-free shopping for those travelling between European Union member states in 1999, despite lobbying from the Republic. However, it could return on journeys to the UK depending on the nature of its exit deal.

ICG, owner of Irish Ferries, is one of a number of companies that believes the UK’s exit from the EU next April could herald a return of tax- and excise-free shopping for travellers between that jurisdiction and the Republic.

The group has set aside space for duty-free retailing in a shop on the upper floor of its newest ferry, the €144 million WB Yeats, in case low-cost alcohol, tobacco and perfume make a return following Brexit. The ferry is due to operate on the daily Dublin to Holyhead route.

The “contingency” duty-free space was the only design change that ICG sought for the WB Yeats, the arrival of which to these shores was dogged by technical problems last summer.

Flensburger Schiffbau-Gesselschaft blamed one of its own suppliers for the delays. The ship arrived here last month and is undergoing sea trials.

It is not clear if duty-free shopping will return for travellers between the Republic and UK once Brexit happens next March, or if consumers will have to wait until the end of any agreed transition period.

Irish Ferries sails from here to both Britain and France. A high proportion of its business is with the UK, indicating that duty free would boost its operation.

DAA, the State company that runs Cork and Dublin airports, has said the return of duty free for travellers between here and the UK as one of Brexit’s few positive aspects.

Its former chief executive, Kevin Toland, told TDs and senators last year it should return as quickly as possible and indicated that it would benefit Dublin and Cork airports.