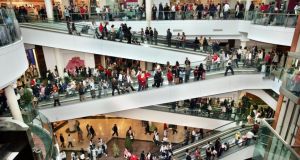 Consumer sentiment weakened for a third consecutive month in October amid worries about the global economy and the risks posed by a potential no-deal Brexit.

Sentiment is now at a near four-year low, the latest index from KBC Bank Ireland and the Economic and Social Research Institute has found.

“It seems that Irish consumers are now of the view that ‘winter is coming’ – and adjusting sentiment and spending plans accordingly,’ said KBC’s chief economist Austin Hughes.

Although the fall in the October sentiment reading was “relatively modest” compared with September and didn’t suggest “anything approaching panic”, the cumulative drop since July represents that largest three-month decline since the autumn of 2010.

Irish consumers remain broadly positive about both their personal finances and the Irish economy in general, but their level of confidence has slipped markedly over the past three months.

Consumers’ outlook on their household finances did improve marginally in October, perhaps as a result of Budget 2019 measures, but it remains well below levels seen through most of 2017 and 2018.

“This scale of drop suggests a major mood change on the part of Irish consumers of late,” said Mr Hughes.

“From circumstances in which they were sensing a clear if uneven recovery, it seems that Irish consumers are now entirely focused on the risk of a sharp and painful reversal.”

The index reading fell to 93.5 in October, from 96.4 in September, leaving it at its lowest level since December 2014.

Mr Hughes noted that the “winter is coming” line, which is borrowed from Game of Thrones, was invoked at a recent International Monetary Fund meeting, in a speech by Indonesian president Joko Widodo outlining the multiple risks facing the global economy.

However, the weakening of Irish consumer confidence is not mirrored in the trends in the United States or the euro zone and has been sharper than the recent decline in sentiment in the UK.

The divergence may be because UK confidence had taken a larger hit around the time of the Brexit referendum result, Mr Hughes said, but it may also reflect “a notably greater sensitivity” on the part of Irish consumers to the economic difference between as “soft” Brexit and a disorderly “hard” Brexit.

If consumer sentiment and spending turns more cautious, this could form “an additional channel through which Brexit threatens the Irish economy”, he added.