George Osborne: ‘We made mistakes’ before Brexit vote

Appearing on BBC’s Newsnight, former Conservative UK chancellor George Osborne said that mistakes were made by his party in the run-up to the Brexit vote. Video: BBC/Newsnight 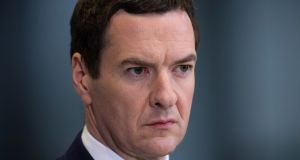 Former UK chancellor George Osborne has said mistakes by the British government during his time in office “opened up the door” in the EU referendum.

Appearing on BBC’s Newsnight on Tuesday, Mr Osborne admitted the Conservative Party “did get things wrong” in the lead-up to the Brexit vote.

Remain supporters had been “too late in the day” in explaining the benefits of EU membership, he said, while not enough had been made of the value of immigration.

He told the programme: “I think we were wrong to play into the debate that everything that Brussels did was a challenge and a battle and was wrong.

“On immigration we were promising targets that we couldn’t deliver and that then led to a debate about how you might deliver those targets . . . we definitely contributed to that argument.”

He added: “It opened up the door in the referendum . . . essentially it allowed in the referendum, a minority of people who were interested in rather esoteric issues of sort of constitutional sovereignty.

“We allowed that kind of minority concern of constitutional sovereignty to be linked to immigration control and that was pretty lethal in that referendum debate.”

But Mr Osborne, who is now the editor of the London Evening Standard newspaper, said he had worked hard “in the national interest” during his time in office in the face of a hung parliament and faced with the “gigantic financial crash”.

“Ultimately the country grew and jobs were created and we avoided the calamitous situation that a lot of European countries found themselves in this period,” he said. – PA