Minister for Justice says withdrawal agreement is ‘95% there’ 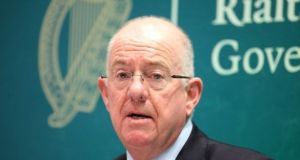 British Prime Minister Theresa May’s office has described as “speculation” a newspaper report that suggests an all-UK customs deal will be written into the legally binding agreement governing Britain’s withdrawal from the EU.

The Sunday Times said the plan would resolve the vexed issue of the Irish border, which is the main stumbling block in the Brexit talks, by avoiding the need to treat Northern Ireland differently from the rest of the UK.

He said there was a “rapidly ticking clock” with just five months to go until Britain exits the EU.

“It’s important...that there be room given to the negotiating teams and the [EU’s chief negotiator Michel] Barnier task force to head towards concluding their work,” he said.

Mr Flanagan said Ireland’s priorities were very much in evidence as the negotiations continued.

He said progress had been made and he agreed with former Northern secretary James Brokenshire, now British housing minister, that the withdrawal agreement is “95 per cent there”.

Mr Flanagan said he was pleased Mr Brokenshire had stressed the Border issue when speaking to the BBC today.

Mr Brokenshire said there was still an issue around Northern Ireland in the Brexit talks, referring to a yet-to-be finalised ‘backstop’ arrangement which would prevent a hard border between Northern Ireland and EU member Ireland if no better solution can be found.

Asked about The Sunday Times report, a spokesman at Mrs May’s office said: “This is all speculation. The prime minister has been clear that we are making good progress on the future relationship and 95 per cent of the withdrawal agreement is now settled and negotiations are ongoing.”

Mrs May presides over a minority government which relies on the support of Northern Ireland’s Democratic Unionist Party (DUP) to get legislation through parliament. The DUP has vowed to scupper any deal that treats Northern Ireland differently to the rest of the UK.- Reuters