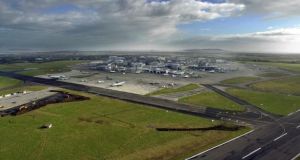 The new runway will be located almost 1.7km to the north of the existing runway at Dublin airport

Politicians will shortly begin debating proposed noise regulations for Dublin Airport that are needed to allow its new runway to operate fully.

State-owned DAA, which operates Dublin Airport, yesterday confirmed that it has given the contract to build the new runway to a partnership of Irish civil engineer Roadbridge and Spanish infrastructure giant FCC Construcción.

Preparatory work for the 3.1km runway is expected to begin immediately, with groundworks scheduled to start in January. DAA’s statement did not say how much the runway would cost to build, but the company has previously estimated €320 million.

Meanwhile, the Oireachtas is due to begin debating a new bill that will allow DAA to appeal a planning condition for the new runway limiting flights at Dublin Airport to 60 between 11pm and 7am.

DAA says that the flight restrictions, imposed by An Bord Pleanála when it gave permission for the new runway in 2007, would severely restrict operations at one of the Republic’s main entry points and make the new runway redundant.

The Airport Noise Regulation Bill, which the Department of Transport is due to publish shortly, will apply an EU directive governing aircraft noise and pave the way for DAA to appeal the flight limits imposed in the original planning permission.

Under the new law, Fingal County Council will be appointed as Dublin Airport’s noise regulator. The local authority will have to ensure that the airport takes measures to limit the impact of aircraft noise on nearby residents.

The department did not say when it will publish the Bill, but TDs and Senators have already scrutinised a draft outlining what the new law will do, a move designed to speed up its passage through the Oireachtas.

The new runway is due to be completed in early 2021. DAA said it will lead to the creation of 31,200 new jobs and an estimated €2.2 billion in additional economic activity by 2043.

The new runway will be located almost 1.7km to the north of the existing runway at Dublin airport. DAA said it will be built at no cost to the State.

“North runway is an essential project for Ireland, as it will position the country for future economic growth for many decades to come,” said DAA chief executive Dalton Philips.

“[It] isn’t Dublin’s new runway; it is Ireland’s new runway, and it will boost the performance of Irish tourism, trade and foreign direct investment in a post-Brexit world,” he added.

Dublin Airport has been planning a new parallel runway since the late 1960s when DAA acquired the land needed.

The recession forced DAA to put the project on hold in 2008, a year after the company got planning permission for the runway. It revived this in 2016.

DAA intends to spend €900 million by 2023 on expanding the airport to handle millions of extra passengers. This includes the northern runway as well as new piers and aircraft stands.

Founded in 1967, Limerick-based Roadbridge has extensive experience in delivering major infrastructural programmes. Among the recent projects it has worked on are the Grangegorman campus, the Limerick tunnel, Facebook’s new data centre in Clonee, and the soon-to-open Center Parcs in Longford.