IAG and DAA at loggerheads about airport expansion 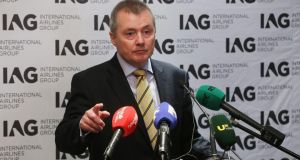 IAG chief executive Willie Walsh is frustrated by the rate at which the DAA is tackling the impact of the surge in passengers by adding extra aircraft parking, gates and other facilities. Photograph: Niall Carson/PA Wire

In 2014 when the airlines and Dublin Airport’s owner, DAA, were horse trading over passenger charges for the succeeding five years, Aer Lingus told the Commission for Aviation Regulation (CAR) that there was “no pressing need for further capacity expansion”.

It predicted that expansion in the wider economy would fuel modest growth in passenger numbers. In Aer Lingus’s opinion, DAA’s overall plan was larger than necessary for a period that would involve “no justifiable case for significant capacity expansion”.

The airline’s submission to the CAR was its contribution to a consultation that ultimately set the maximum that the airport could charge airlines.

A lot has changed since 2014. The charges were based on a prediction that Dublin Airport would handle 24.9 million passengers in 2019. This year passenger numbers could hit 30 million. In 2015, International Airlines Group (IAG) bought Aer Lingus, bringing with it the muscle to add significantly to the Irish carrier’s fleet.

Nevertheless, even without the takeover, Aer Lingus was well-advanced with a plan to exploit Dublin’s geographic position and develop the airport as a hub, flying passengers in from Europe and Britain, and flying them out again to North America.

Neither the airline nor the DAA predicted Dublin’s overall rate of growth.The DAA is trying to tackle the impact of the surge in passengers by adding extra aircraft parking, gates and other facilities.

IAG chief executive Willie Walsh is frustrated by the rate at which Dublin is doing this. But his criticism comes just weeks after outgoing DAA chief Kevin Toland signalled that the company wanted to consult its biggest customers, Aer Lingus and Ryanair, about investment.

Toland indicated that DAA would only build what the airlines sought, but said they would have to pay for it. Walsh’s criticisms indicate that should those talks get under way, there is going to be a big gulf between the two sides.