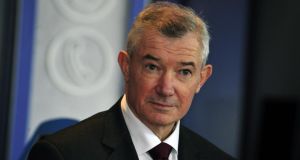 Richie Boucher shunned the spotlight as Bank of Ireland unveiled the last set of results under his stewardship on Friday – leaving his chief financial officer Andrew Keating and head of Ireland retail Liam McLoughlin to talk to analysts and reporters.

But his fingerprints were all over them.

Bank of Ireland, alone among Irish lenders bailed out during the crisis in avoiding State control, revealed that it has finally started to set money aside to cover Boucher’s most sacred ambition in recent years: reinstating dividends to investors. Payouts are expected to start early next year.

While Bank of Ireland’s level of bad loans were never as bad as the rest of the industry’s – reflecting its (relatively) more conservative lending practices in the bubble years – Boucher has been playing a long game wading through bad loans.

While rivals AIB, Ulster Bank and even Permanent TSB have been freeing up money in recent years that had previously set aside for bad loans, Bank of Ireland continues to book net loan impairment charges. The bank booked another such provision in the first-half figures, of €59 million, albeit €36 million lower than for the same period last year.

The fear for Boucher is that his successor, HSBC executive Francesca McDonagh, who takes over the helm in October, may decide to clear the decks and take one big charge to draw a line under the crisis.

Meanwhile, it is likely that the bank will hold off on Boucher’s previously-stated ambition of growing its UK business through deals as it assesses the fallout from Brexit. Bank of Ireland is already the most directly exposed Irish lender to the UK’s divorce from the European Union, with about 40 per cent of its loan book based in the world’s fifth-largest economy.

However, the bank feels it is relatively cushioned in what Keating referred to on Friday as its “second home market”, where it sells mortgages through the Post Office and the broker market.

The bank’s focus on lending between £150,000 and £160,000 per home loan in the UK leaves it in a “more resilient part of the mortgage market” than areas such as central London, where the market has stalled and luxury real-estate prices are falling.

“Not many people in Knightsbridge go down to the Post Office to borrow for a mortgage,” said Keating.