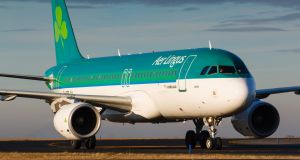 Aer Lingus made a profit of €59 million for the first half of 2017. Photograph: iStock

Aer Lingus earned €59 million profit in the first half of this year and wants to expand its transatlantic services from Dublin, including possibly adding a route to Las Vegas.

He singled out pressure on aircraft parking and baggage handling for causing delays, and maintained that the airline had raised these problems over a number of years.

“The current airport performance is not in line with what we would like to see,” he said. “Unless we have confidence that they can address these issues, we would have to question whether we put more capacity into Dublin.”

Mr Walsh pointed out that a number of US airports were interested in securing Dublin services and that the group had aircraft available.

“We have secured aircraft. The issue for us is where do we put them,” Mr Walsh said. “Aer Lingus has been expanding its transatlantic network. There are more opportunities there.

“It’s not acceptable that the airport believes we are captive and that we will just put the aircraft in there anyway.”

He claimed that major problems followed when Dublin upgraded its baggage-handling software during the peak summer season, despite IAG pleas not do so.

A Dublin Airport spokesman said this was “categorically untrue”. A supplier did the work and there were some problems for half a day, but these were dealt with.

“Dublin Airport is committed to working with all its customers to help them operate efficiently and to grow their business at Dublin,” the spokesman said.

“Dublin Airport is currently investing €100 million per year to upgrade and maintain its facilities for the benefit of airlines and passengers.

“In the first six months of this year, Dublin Airport passenger numbers increased by 6 per cent to a record 13.8 million and we are seeing growth from all of our major airline customers.”

The power failure that grounded 75,000 passenger’s flying with IAG’s biggest carrier, British Airways, over a UK midterm holiday weekend in May added to costs, Mr Walsh noted. The group has said the bill for the failure would be €65 million.

Its figures show Aer Lingus increased revenue by 6.6 per cent to €839 million in the first half of the year from €787 million during the same period in 2016. Operating profit rose 40 per cent to €59 million from €42 million.

Mr Walsh said it had a strong second quarter, with an operating profit of €805 million before exceptional charges, from €555 million last year.