Qatar Airways to go ahead with jet orders despite ban 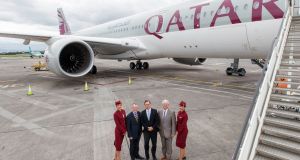 Qatar Airways, which has been losing passengers after a flight embargo from four Arab countries, is still making money and will go through with jet orders it has already committed to, as the nation seeks an international ruling restoring its access to air corridors, a senior official said.

He was speaking at a meeting with reporters in Montreal on Thursday. The airline, which recently opened a route from Dublin to Doha, may not be able to meet its previous financial targets but is “in good shape” as it opens new routes, he said.

At a hearing on Monday, Al Sulaiti will make a case to the International Civil Aviation Organization, a Montreal-based United Nations agency, to open six or seven international flight corridors and mitigate the economic fallout from the crisis between Qatar and a bloc comprised of Saudi Arabia, Egypt, the United Arab Emirates and Bahrain. The request is the first of three files the country is preparing to regain air rights, he said.

Qatar’s neighbours last month severed diplomatic and transport links to punish it for allegedly backing Islamic militants, a charge the Gulf nation denies. The resulting isolation has forced the world’s richest country per capita to open new trade routes to import food and other essentials, and added hours to flight times as pilots circumvent its neighbours’ airspace.

Qatar is also in discussions with two countries to invest in ports, Al Sulaiti said, declining to name them. If Qatar Air’s plan to acquire 10 per cent of American Airlines falls through, there will be other opportunities elsewhere, according to the minister.