Airbus A350 goals on track, but A320neo plans in doubt 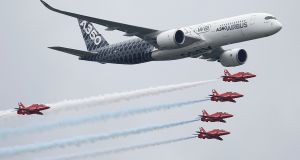 An Airbus A350 aircraft seen at the Farnborough International Airshow in 2016. (Photograph: Reuters)

Airbus said on Wednesday it was on track to meet a target of 10 A350 deliveries a month by the end of 2018 as it hit a milestone of 100 deliveries since Europe’s newest wide-body jet came into service, but doubts remains over its A320neo delivery plans.

Airbus chief operating officer and president of commercial aircraft, Fabrice Bregier, reaffirmed the A350 target after delivering a A350-900 jetliner to China Airlines.

The European planemaker is juggling complex industrial and demand factors as it increases production of the A350 and the smaller A320neo family to regenerate its portfolio.

The Gulf carrier previously cancelled a series of A320neo aircraft due to problems with engines developed by Pratt & Whitney. It is in talks to take the larger A321neo, but this time powered by alternative engine supplier CFM.

Airbus’ Bregier has been in the Gulf state recently for talks, according to Qatar News Agency.

Pratt & Whitney parent United Technologies on Tuesday reaffirmed its annual target for deliveries of its new Geared Turbofan engine for the A320neo.

Airbus is expected broadly to stick to delivery expectations when it reports earnings on Thursday.

Industry sources say it has accepted Pratt’s commitments and wait for more engines, but they say it remains frustrated at the slow pace of recovery which puts pressure on the planemaker’s delivery plans for the rest of the year.

Industry sources say more than half of these were originally due to be Pratt & Whitney variants under the original confidential production plan for the year, since Pratt’s engine entered service before the competing CFM model.

In the first half, Airbus delivered just 16 of Pratt-powered A320neo jets, barely a third of the 43 powered by competing CFM engines, several sources said. That leaves more than 80 Pratt-powered jets to deliver in the remainder of the year.

CFM has indicated that it sees rising demand for its new LEAP engines but its production plans are unlikely to contain enough buffer to pick up a significant amount of slack due to the Pratt difficulties, at least in the short term.

It has also had some glitches with forgings and materials but is so far said to be just a few weeks behind schedule.

Airbus has meanwhile boosted production of the earlier A320ceo model as it sells jets at a discount to keep assembly lines running smoothly.