Greece aims to emulate Ireland with a ‘clean’ bailout exit

Even if the prime minister succeeds in his aim, there is no guarantee of political reward 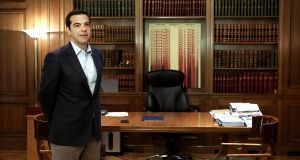 The Tsipras government in Greece will be pleased with the country’s first venture into the bond markets since 2014, selling €3 billion of a five-year bond this week. It is seen as a first, tentative, step towards a clean exit from the third bailout programme, due to end in August 2018. This is significant for a country that was oh-so-close to crashing out of the euro zone after Tspiras called a referendum on July 5th, 2015, in which the Greek people rejected the bailout terms being proposed by the Troika. Fraught negotiations followed, before a new bailout deal was struck, amid the drama of bank withdrawals being limited for citizens and a virtual shut-down of the banking system with foreign transfers stopped.

Since the brinkmanship of that summer, Tsipras has slowly altered his tactics. Now he is attempting to do like Ireland and Portugal: exit the bailout programme “cleanly”, in other words with no need for an ongoing funding backdrop from the Troika.

The new bond sale is certainly a first step and will reduce funding needs in the year after the planned bailout exit by retiring some existing outstanding loans. More bond issues will follow. Greece is taking advantage of extraordinary market conditions, with about half euro zone government debt trading at a negative yield. Against this backdrop, some investors are happy to take the risk in return for a 4.65 per cent yield.

And Greece is still a risky proposition. The bulk of its €320 billion debt pile is owed to the Troika, and debts still amount to 180 per cent of GDP. Growth in the first quarter was running at an annual rate of just 0.4 per cent. The population has put up with year after year of austerity, with more to come.

To succeed in leaving the bailout, Greece will also certainly need debt relief from EU lenders, a point strongly made by the IMF. As ever, the rich countries led by Germany are not happy with this. Will they soften their stance to allow Greece a chance at redemption?

Meanwhile for Tsipras, facing a general election by 2019 at the latest, the stakes are huge. And as we have seen in Ireland, even exiting a bailout programme is no guarantee of success at the polling stations.