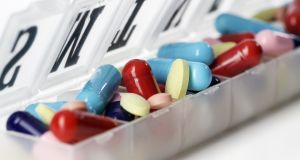 The Framework Agreement on the Supply and Pricing of Medicines offered the Government savings on drug prices, especially on older medications

Just one year ago today, the Government and the body representing Big Pharma, the Irish Pharmaceutical Healthcare Association (IPHA), signed a new framework agreement setting prices for medicines in Ireland.

The accord had been a long time coming and, at one point, an exasperated HSE had started writing to companies threatening to impose price cuts of up to 30 per cent on individual drugs unilaterally.

The Framework Agreement on the Supply and Pricing of Medicines offered the Government savings on drug prices, especially on older medications, as well as using a bigger basket of countries to set prices. Savings of up to €750 million over four years were promised. The IPHA says it has delivered on its commitments, delivering €140 million in savings to the health budget already.

For the IPHA, the benefit of the agreement was that the drugs being developed by its member companies would get access to the Irish market. And there’s the rub. In the 12 months since the deal was signed, a growing number of drugs are being referred to the Minister for Health. The HSE says they should be available but it has no budget to pay for them.

Just two of these drugs has made it to market; another nine are waiting for the Minister to find some cash. Fourteen more are working their way through the system.

The HSE says the budget is spent, taken up by greater volumes of existing drugs. The drug companies respond that medicines budgets are taking no account of changing demographics and the need to spend more on medicines.

Relations between the two sides are deteriorating sharply, with what was termed a “crunch” meeting last week ending in stalemate.

The issue for the companies is that there is little incentive for it to deliver savings to the State if it cannot get its expensively-developed new drugs to market. All in all, it’s a poor way to mark an anniversary. Compromise is required: the question is where will it come from.