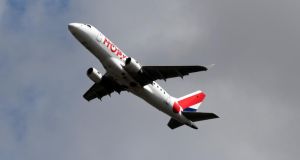 Air France-KLM is paying £220 million for a 31 per cent stake in Virgin Atlantic Airways. Photograph: Reuters

How to make sense of the elaborate deal struck by four global airlines on Thursday?

To recap: Air France-KLM is paying £220 million (€246 million) for a 31 per cent stake in Virgin Atlantic Airways. The Franco-Dutch carrier will thus join Delta Air Lines, owner of slightly less than half of Virgin Atlantic, as an anchor shareholder.

Meanwhile, Delta and China Eastern Airlines will each purchase 10 per cent of Air France-KLM via a capital increase.

If this all sounds unnecessarily byzantine, it isn’t really. The goal is that all the companies work more closely together, helping them fly more passengers to more destinations at a lower cost (to themselves). Plus, Air France’s balance sheet gets a makeover.

Ideally, you wouldn’t need such convoluted cross-shareholdings. But the airlines’ hands are tied by rules restricting foreign ownership. So cross-border takeovers are rare whereas alliances are common.

Presumably Virgin Atlantic’s ever-effervescent founder Richard Branson is happy to sell now, and hand over control, because competition is heating up over the Atlantic. Consider Norwegian Air Shuttle, with its fleet of shiny new planes and super-low fares between Europe (notably Ireland) and the United States, which is taking Virgin’s old spot as transatlantic travel’s sexy upstart.

And while Virgin has been struggling, as shown by the modest transaction price, it has one very attractive asset: landing slots at London’s crowded Heathrow airport, where passengers tend to pay higher fares. In that context, a defensive three-way partnership between Delta, Air France and Virgin across the Atlantic makes some sense.

Yes, Air France-KLM isn’t exactly flush with cash, in part because of its high labour costs. Its €3 billion of net debt doesn’t include the debt-like payments Air France has to make to rent planes (known as operating lease obligations). The company’s lease-adjusted net debt is almost €11 billion (2.7 times a measure of lease-adjusted earnings). In contrast, the company has just €2 billion of shareholder equity and a €3.7 billion market value.

But this makes raising capital a sensible thing to do at an opportune moment: the stock has more than doubled in a year as Asian customers have started flying to Europe again. Operating profit trebled in the first six months of 2017 compared to the same period last year.

Of course, Air France could have tapped its shareholders for money. Yet Delta and China Eastern bring other benefits. Better co-operation between the partners should deliver €60 million of extra savings. That would help Air France become more competitive and offset some of the dilution from issuing new shares at a 17 per cent discount. Plus it’s hard to find fault in building stronger ties to a Chinese carrier.

For Delta, the €375 million for the Air France stake (which comes with a board seat) is comfortably within its means. The US carrier has generated about $13 billion (€11 billion) of free cash flow in the past four years.

Unlike Europe, the US airline market is highly consolidated, meaning airlines there get a pretty easy ride when setting fares. Air France-KLM doesn’t have that luxury in Europe, where the price battle is brutal. Getting Delta on board isn’t the worst flight plan. – (Bloomberg)