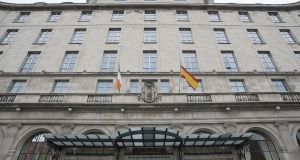 Accounts for the Gresham Hotel Company Limited show turnover increased to €18.2 million in the year to the end of December 2016 with pre-tax profit coming in at €5.51 million. In 2015, the group made a pre-tax profit of €40.1 million after a €30 million writeback on impairment provisions.

The Gresham was sold by Nama, which acquired the hotel after it took over loans from Precinct Investments, which bought the Dublin property in 2004 as part of its €117 million buyout of the Gresham group. The group previously also owned the Park Inn Hyde Park and the Metropole in Cork, which it sold in 2015 for more than €5 million.

Staff numbers at the Dublin hotel increased by 11 in 2016 while wage and salary costs increased 8.3 per cent to €5 million.

As for the future outlook, the company directors said they expect “to continue trading positively for the foreseeable future”. While risks include general economic conditions and tourism activity in Ireland, management believe that risk is reduced “given the quality and long established presence of the Gresham in the market place”.

The Gresham’s parent company is Ryan Travel Holdings Limited whose ultimate parent is the RIU Group.