Trump-owned Doonbeg golf resort has yet to turn a profit 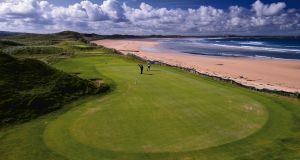 Doonbeg Golf Resort in Co Clare: accounts show that €3.1m was ploughed into the resort firm in 2016 by the Trump organisation

US president Donald Trump’s investment in the west Clare golf resort of Doonbeg has yet to make a profit despite a 30 per cent jump in revenues to €6.5 million, according to accounts just filed.

Figures for the Trump-owned TIGL Ireland Enterprises Ltd for 2016 show that it continues to make operating losses, although these almost halved in that year to to €807,090.

Joe Russell, who is general manager of the venue, said it was the best year’s trading since the full resort facilities opened in 2006. And he added that revenues had jumped a further 10 per cent in the year just passed.

He said that the golf operation enjoyed “record green fee business and a steady flow of new members”, while there was also renewed interest in the resort’s property operation.

The accounts show that €3.1 million was ploughed into the resort firm in 2016 by the Trump organisation on top of €5.5 million the previous year.

Mr Trump’s son Eric, who has a hands-on role in overseeing the Trump organisation’s investment in Doonbeg, said: “It is incredibly gratifying to see our vision for Trump Doonbeg come to life. I continue to be impressed by the beautiful product and the business improvement at the property.”

Mr Russell attributed the jump in revenues in 2016 to improvements brought about by the Trump investment, and the strength of the Trump brand internationally, together with an improving economy. Ireland’s reputation as a safe destination and high levels of hospitality were also cited.

Mr Russell said that while the resort operation performed strongly in 2017, it would incur “a small loss in 2017 largely due to ongoing investment and capital expenditure improvements”.

He said the resort is targeting to make a profit this year.

Mr Trump resigned as a board member of TIGL Ireland Enterprises Ltd days prior to being sworn in as US president last January. However, the accounts confirm that the US president retains his 100 per cent shareholding in the Doonbeg company.

In December, the resort secured planning permission for its coastal protection work plan from Clare Co Council, though the decision is expected to be appealed to An Bord Pleanála by objectors.

Mr Russell said that the coastal protection works are “critical to the future of this business, its growth, sustainability and economic impact locally and in the region”.