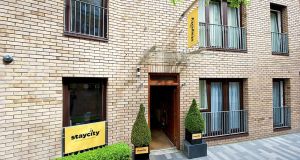 Revenues at Staycity Aparthotels rose by 25 per cent in 2017, as the Irish aparthotel group eyes up significant expansion across Europe, with its Dublin portfolio expected to grow tenfold by 2022.

The company, which offers short-term and long-term apartment and aparthotel lettings, was founded in 2004 by Tom Walsh and his brother Ger, starting with a single apartment in Dublin’s Temple Bar, a former recording studio used by the likes of U2. It currently has a portfolio of some 4,500 apartments across its main markets of Britain, Germany and Ireland, but says it is on schedule to grow this to 15,000 by 2022.

Revenues rose to about €60 million during 2017, and the company is eying turnover of €300 million by 2022, which could ultimately see it float on the stock market.

“Brexit and general economic environment have remained a risk but we have attempted to reduce that risk, where possible, with a strategy of growing the business across a number of markets and actively managing currency exposure through foreign exchange hedging,” he added.

During 2017, the company, which is still based in Dublin, opened aparthotels in Marseilles, Lyon and Manchester as well as revealing details of a new premium brand, Wilde Aparthotels by Staycity, the first of which will open in London this spring, with a second to follow in Edinburgh in 2019, and another at the former Checkpoint Charlie on the Friedrichstrasse in central Berlin.

The group will open another outlet in Liverpool’s Corn Exchange building later this year, with more, including a 284-key aparthotel near Disneyland Paris in Val d’Europe with swimming pool with bar and deck, and a 175-unit building near Venice, in 2019.

Staycity’s third property in Manchester, with 250 apartments, is also expected to open at the end of 2019.

Dublin is set for significant growth over the coming years. The group already operates 179 apartments across the city, including locations in Christchurch and Millennium Walk, but expects to have 1,500 units in the capital by 2021.

Staycity has teamed up with Tetrarch Capital, an Irish investment group, for two developments on Pearse Street in Dublin’s city centre. A 142-unit on Mark Street is expected to open in 2020, with another development, in Chancery Lane, scheduled to open in 2019 with 50 apartments.