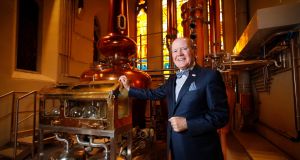 The number of tourists travelling to Ireland’s whiskey distillery centres increased by 11 per cent last year, the Irish Whiskey Association said on Monday.

The 12 centres, including the Slane Distillery in Meath and the Pearse Lyons distillery in Dublin which opened last year, attracted visitors mainly from the US, the UK, Germany, France and northern Europe, the association said.

“Whiskey tourism is delivering tourists, jobs and investment to local economies right across Ireland, from Dublin’s Liberties to rural communities,” he added.

In addition to the newly opened facilities this year, a number of new distillery visitor centres are expected to open this year in locations including Clonakilty and Drogheda.

Mr Lavelle took aim at the Government’s alcohol Bill which could restrict the promotion and advertising of alcohol. “Advertising of visitor centres could be severely constrained,” he said, noting that it was “yet another unintended consequence of this alcohol Bill”.

“[This could] put jobs at risk in communities which are heavily reliant on the influx of visitors to the local distillery visitor centre,” he added.